I've run into a problem with the preview window for the Creation Kit. Recently, everything started showing up with nothing but dim orange and blue lights illuminating it. 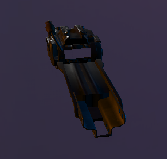 I don't know what caused this, and I've been stumped for a solution. As far as I can tell, these are the "warm" and "cold" lights in the preview window, but modifying them doesn't restore the brightness of the default lighting. Deleting the INI files - for anything and everything related to Fallout 4 - has not resolved the issue. I know I've had this issue in the past, and I still don't know what solved it. This makes it very difficult to assess the details of a mesh, so I'd really like to find a reliable solution for this.

While the preview window is active, press A key in your keyboard.

I've tried that, and, while it does work, it doesn't stick. Any preview I open after that reverts to the dimmed lighting.

I do appreciate the help, but I'd like to fix this issue for good. Much as I know it might be nitpicking, it's a nuisance to have to tap that button every time, and I just know the workaround is going to dribble out of my brain at some point in the future.

It's almost a year later, but I think I have a tentative solution to the problem.

My theory so far is that this has to do with the render window's lighting getting stuck on the preview window. I was able to get the lighting to update permanently by doing the following:

1. I loaded up the Abernathy Farm (though I suspect this would work for any cell).

2. I ticked on the Toggle Sky button.

3. I shut down the Creation Kit before doing anything else.

4. I loaded the Creation Kit back up.

This changed the preview window's default lighting. I don't know if this is an exact solution, as I had to get the Creation Kit Fixes mod. Without it, the CK would usually crash while trying to load NPCs or cells.

If this turns out to be a dud, I'll update this post. If not, I'll leave this up for anyone else who runs into this problem.

Also tagged with one or more of these keywords: creation kit, preview window, lighting, orange and blue, dark