31 replies to this topic

The forums seem to be cluttered with mods requesting a playable or companion-able illithid or mind flayer race.
For those who are not familiar with these creatures, illithids are creatures inhabiting the underground realms know as the underdark. They are a race of psyonics, or mind mages. They communicate almost solely via telepathy and enslave 'lesser' races by controlling their minds. Via some kind of mental communion with others in their city they form hive-like cities, most of the times centered by a gigantic, living brain.

Illithids are tall humanoids. Their defining feature is their head: their faces are squid-like, bulbous, with four tantacles surrounding a round mouth (if illithids have mouths at all is open for debate). These tantacles serve to suck the brains out of victims that have been stunned by the illithids' mind magic that are not fit to serve as slaves.
The skin color of an illithid is not certain, different books and games use different colors, ranging from blue or purple to pale green (of which I am a fan). Thus, I'll try to add multiple possible skin colors for the race.

I have started work on created these magnificent creatues. I will try to be as lore-friendly (as in D&D lore, but Elder Scrolls lore as well) as possible, adding serveral powers and spells.

Illithids, or mindflayers, are an evil race of squid-faced psyonic creatues. They were created by the daedric prince Hermaeus Mora. Certain is that it is a variation of the seeker, his personal daedric servants, but it is unknown if that are their only predescessors or that some other creature has been used in their creation. Mora has blessed these creatues with magnificent mental powers, giving them a distinct advantage over weak-minded opponents.

development will be posted seperately in posts down below, unless the progress is important enough to be placed here. I don't want to ruin the front page with pictures of half-zombie demonic mutated squids

If you want to help with the race, please contact me. while I'll get it done in due time, any help I get will speed thigs up quite a lot. Besides, it might help me with the well-known (among modders) "modding disease", meaning that half the modders just stop develometn halfway and never continue development.

Thanks for reading this giant wall of text. I really appreciate it.

I am currently woring on the head mesh. I've been busy getting the race to work, so the race currently uses a deformed argonian head (I just wanted to see if it worked at all, it wouldn't be the first time it wouldn't work after hours of modding). Also, I have added a test texture from a previous UV map, so its kind of weird. 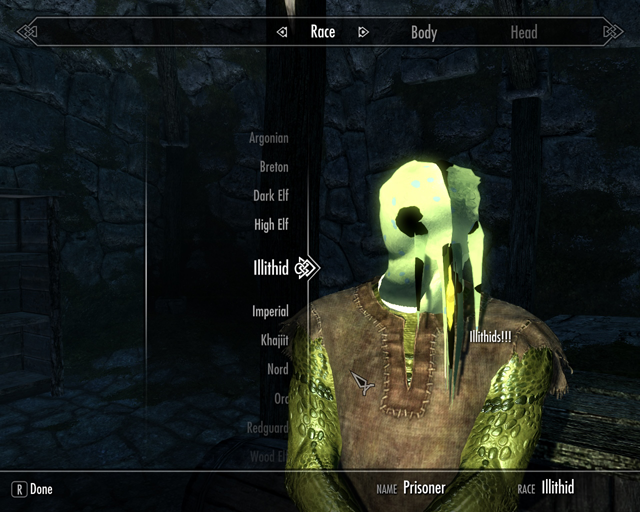 Haven't had a heart attack yet? good! You can see it has tentacles though, so it is working

Also, you can see it uses the argonian body. If you don't assign an armor race you'll end up with a floating head. I might switch to a different race, but I might remodel some robes and assign them to this race only (that is possible).

Work on powers has not yet begun, but I have experience with magic effects (if not with scripts) and will easily do this.

I've been working on getting the meshes right and I updated the UV map (the last image used the texture of its predecessor but had a different UV map, that's the reason why there are black spots everywhere), and this is the result: 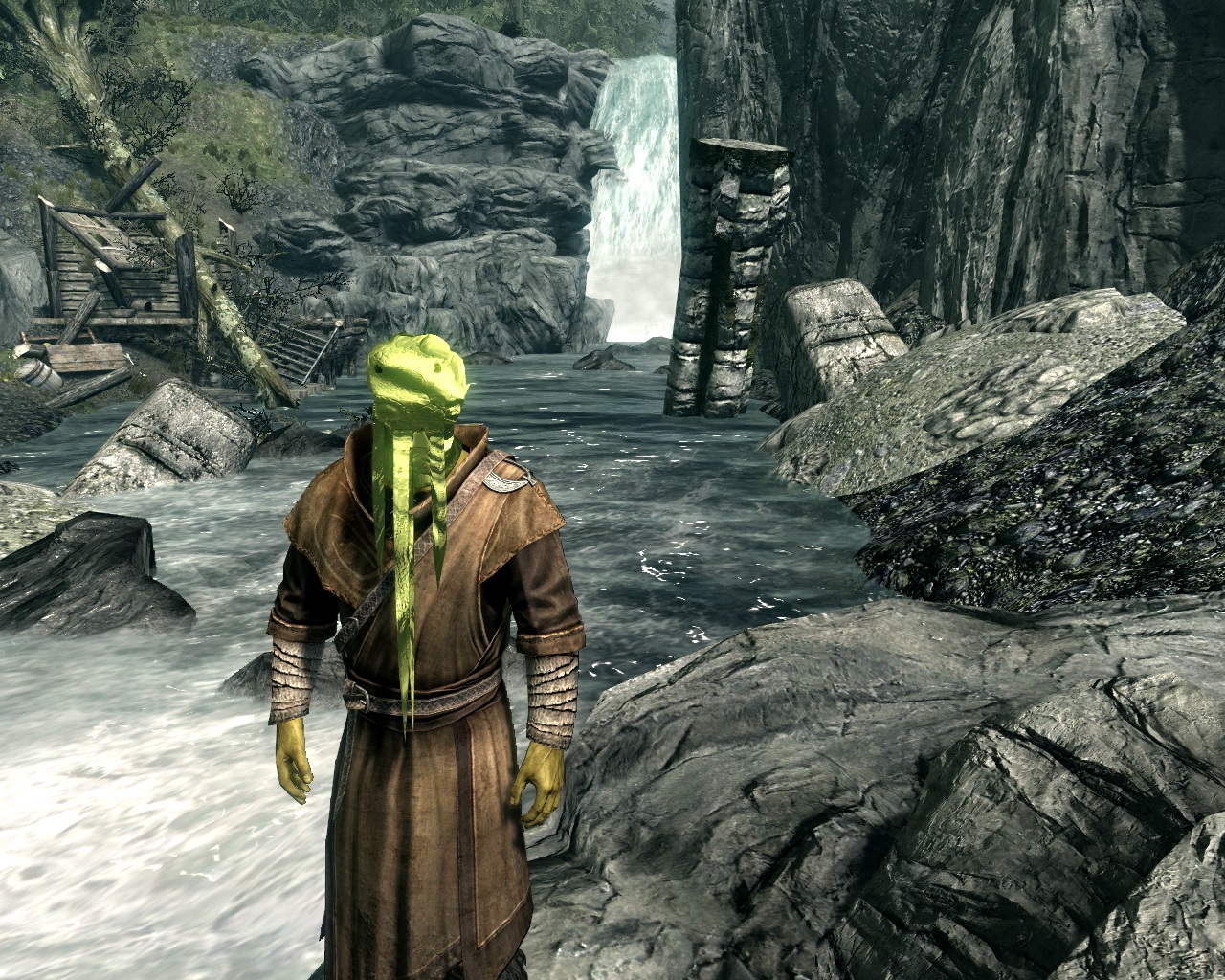 it's still a bit scaly, which will be because I used Argonians as a source for everything. I'll fix that.

Tentecles might be a bit longer, and I need to fix the weight painting (which makes the tentacles, for example, follow the chest rather than the head). at least the textures are fixed and I'm getting no more chrashes

Just thinking, might be kind-of hard for new modder to make the tentacles use HDT physics? As that would be cool.

Hey mister shadowjin, back from liches to illithids?

I've never worked with (or looked very closely at) HDT physics. It would be kind of cool, but I want the mesh and textures done first before I look at this stuff. Thanks for the tip though!

Hey guys! I have been working on the illithid, just not spamming every minor update on the forums.
I've done some work on the mesh and am trying to work out how to get some real good textures... perhaps I need some specialized software or something, I just hope I can find someone willing to do it for me, to really do the race justice. Plenty of time for that though! 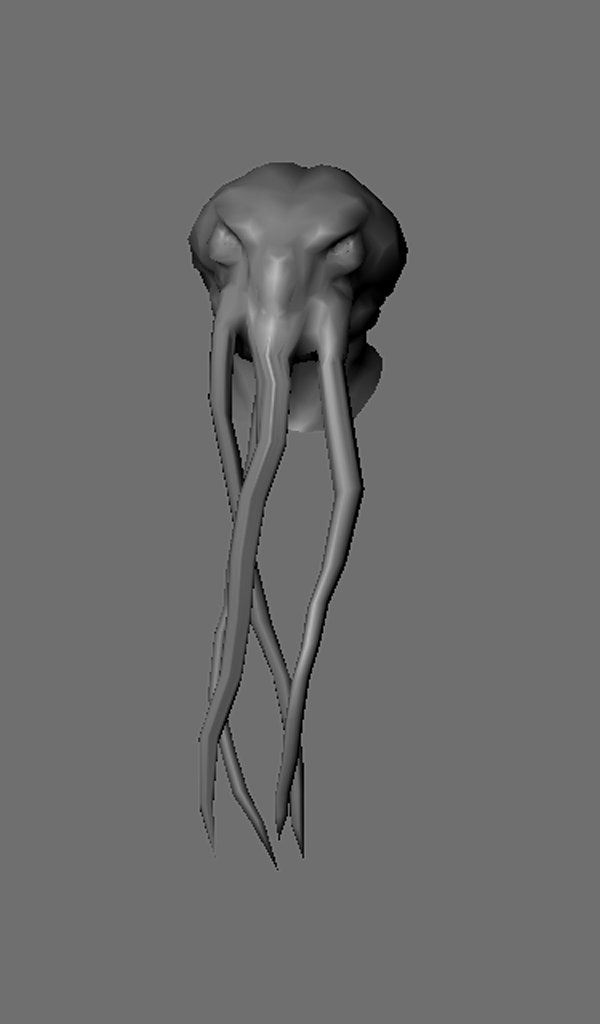 that head ain't bad at all TBH, Looks quite nice.

Will be working on making hands. Illithids have four-fingered hands, so one finger will have to go on the vanilla mesh. I will also make some gloves four-fingered in the future, but not now. I just hope that it will work considering all kinds of animations use five fingers (like casting). Also, i might be looking into making the eyes come back (they are currently somewhere withing its head).

Other things to mesh:
-Naked body

-hoods. Argonian hoodswork fine with minor clipping, but if I set armor race to argonian, the illithid will have scales when wearing non-full armor sets like iron armor.

with the exception of the robes they'll all be done after full realease though, I think.

Thanks for the support!

when i opened the default malehands in NIFscope, I saw that it had 26 nodes. Ill maybe tinker witht that after release, but not now xD.

I would very much like to see some Apocrypha tie-in with the mod. Also, would you consider having a unique start or something for the illithid? Starting straight out of helgen would be pretty weird. Maybe you make a character of any race, make your way to somewhere close to helgen or somewhere where you finish a small quest to become a Illithid. Brings up a customization panel where you can choose your skin color and stuff. Heraeus mora converting the dragonborn into an illithid to follow him, then me role playing and going to kill miraak and take his place sounds like the story I could get behind. Do you think Illithids have powers that allow them to fool people into thinking they are human?