I'm long time off from Skyrim and i'm thinking about an update on my mod "The Evil Mansion". It was created for Oldrim, and ported to SE by another person.

Should i install Oldrim with using the old CK (Steam version), doing all work there. Then port it? Or should i use the new CK?

Would it also be possible to port something back (from SE to Oldrim) for support?

Are people still playing old version or are most players on SE now? When i left SE wasn't very popular.

Personal opinion: If you want to update and support the LE version then continue to use LE to work on the mod.  It is much easier to port from LE to SE than the other way round.

Thanks again Ishara, will do so.

I find myself back at the same issue I had before.   Quest Markers...    How do I setup in the Quest Objectives tab in the quest, to point to an object?  Let's a say a book laying on a table in a room.  I want  quest marker over that book telling the player pick this up.

I have it in my Quest Objectives (on object index 40), in the target ref section I have the alias of the item, and in the Quest Aliases I have it there also.

But in that he shows how to do a ring that comes from NPC inventory.

Note: My other settings like optional, fill type aren't applicable for this example. All TargetRef and the Objective Tab cares about is that the alias is filled AND TargetRef is pointing it. 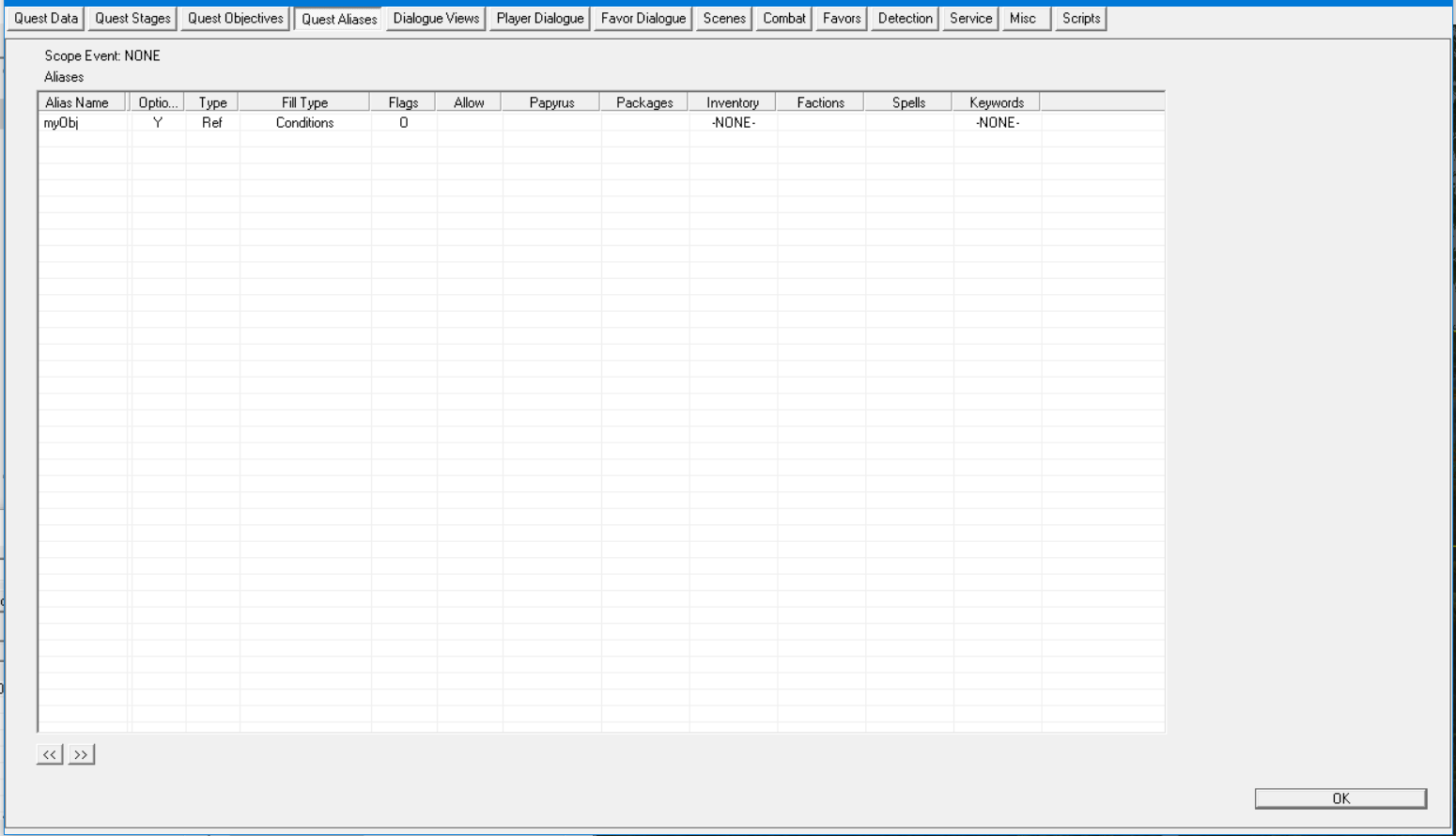 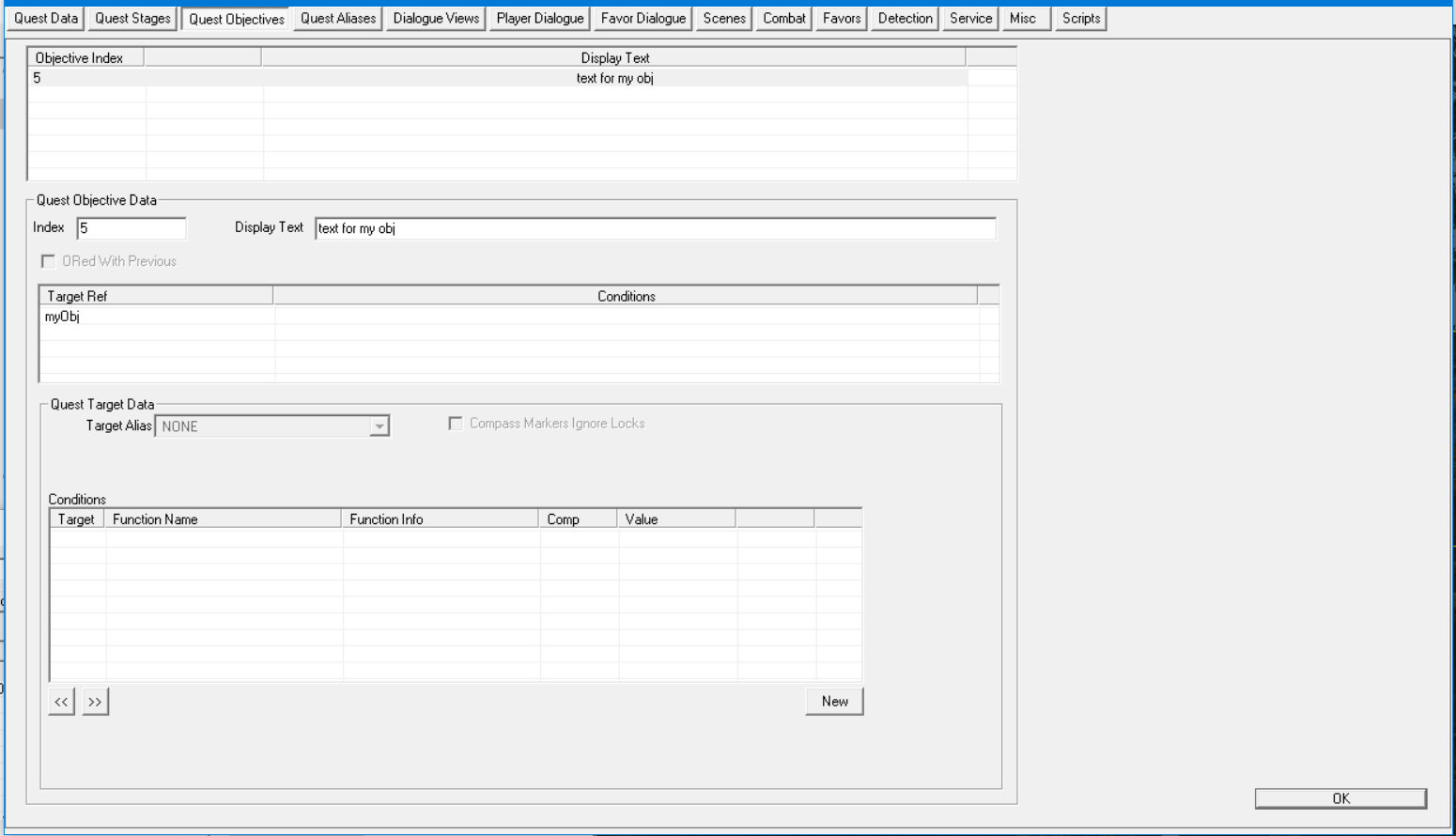 code in stage fragment or wherever you need to place it:

Got a stupid question. Found answers, but want to be sure i didn't get it wrong. I installed many mods and played for a while. Now I have to reinstall the game because of a new PC. Can I use my old save games, if I install all the mods that worked with this save game or do I have to start a new game?
Thanks for your help.

It is possible, better if you still have access to the old PC.  As it is probably easier to copy the game folder plus any mod manager folders.  But since each person's system is different and that they may not be using the same programs, it would be difficult to give instructions that would work for everyone.

I will outline what I did to get SSE + MO2 working in a new Win 10 partition on a Win 7 system.

Step 4: Updated all paths in MO2

Step 6: Started SSE from MO2 and confirmed that all mods were functioning properly

Step 12: Ensured all paths were correct in MO2

Step 13: Started SSE from MO2 and confirmed that all mods were functioning properly

I was able to carry on with my existing save files because I had kept them with their specific MO2 profiles rather than being in the Documents folder.  As a result, if I really want, I can go into either Win 10 or Win 7 and play the game picking up exactly where I left off.

That said, if you do not have ability to do something similar, then you're going to need a tool that can let you know what plugins are required for your save files.  Then you need to make sure that you install the mods containing those plugins (preferably the same versions) and that those plugins are listed in the exact order as required by the save file.  Loose files can affect how things appear or behave (in the case of scripts and animations) so you may have to play around with which mods get priority in order to have the same behavior as before.  Even then, there could be some things that are not quite what they were before.  It is always better to copy / transfer the previous set of data actually used with the save files than try to re-build it.

Wow. Thank you so much for your quick answer. That helps me a lot. I'll try it the way you described.

Want to thank you again. It worked perfectly fine. Now... To the next 500+ hours of skyrim. After 10 years I never completed the main quest ð

Note: My other settings like optional, fill type aren't applicable for this example. All TargetRef and the Objective Tab cares about is that the alias is filled AND TargetRef is pointing it.

code in stage fragment or wherever you need to place it:

Thanks for the response, but I think I need a little more info...

In the Quest Alias Tab it is listed there  much like your MyObj is.

In the Quest Objectives tab I have it listed just as you do  (under stage 40).

Also other things, I do have the quest selected in my Journal , for other quest the quest markers show up.     So I think my problem is in the   Reference Alias    could you show what should be filled in there?

Also tagged with one or more of these keywords: questions, answers, mods