Tell us about your character!

Tell us all about your character, you can use this as a template if you want:

Name: Fleia
Gender: Female
Race: Mystic Elf
Starsign: Apprentice
Class: Askar
Homes: I think I've got them all, and then some...

Goal in Life: To not die.
Why he was sent to jail: Well, here it's "she", and it was probably for something lame like jaywalking...

Hah...yes, there have been several similar threads, but that doesn't keep me from answering them all. Plus, I haven't used this format before. I'm just going to do it for my most recent character, my last "god-like, did everything" character is more or less retired.

Well since I have eight characters I'm going to tell about my second favorite character.

I'm going to post a screenshot of him as soon as I'll make one.

Name: The one in Daedric (he doesn't remember his elvish name)
Gender: Male
Race: Mystic Elf
Starsign: The Serpent
Class: Kynmarcher
Homes: In planes of Oblivion the palce you get with Dremora Companion mod, in Cyrodiil NerZitar Tower.
Favourite Land: The planes of Oblivion
Best Friend: None
Worst Enemy: Cyrodiil guards, High Chancellor Ocato and good citiziens of Cyrodiil who are ready to fight for their land.
Combat Preference: Melee
Combat Style: Swords and destruction spells that does fire damage.
Greatest Fear: To lose
Greatest Want: To gain respect of Dremoras.
Physique: Uh... slender...
Level: 58
Joined Guilds/Factions: None
Enemy Guilds/Factions: Imperial Legion, Fighters Guild,Mages Guild, The Blades.
Childhood: Was abandoned by his parents, grew up in wilderness.
Teenage: Was learning how to survive in the wilderness, tricked people into hiring him as a guide only so he could lure him into his own made deadly traps or a mine/cave/ruins filled with monsters so he could later loot their corpses.
Prefered Food: He's not picky about food so everything that won't poison him.
Disliked Food: Everything that would poison him.
Favourite Arrow Type: He doesn't use bows much but if he does when only Dremora arrows.
Favourite Blade Type: Dremora longswords.
Spells: All spells that does fire damage.
Friendly Races: None
Neutral Races: None
Hostile Races: All races.
Favourite City/Town: None
Least Favourite City/Town: All towns.
Favourite Daedra: Mehrunes Dagon
Least Favourite Daedra: Meridia
Favourite Divine: None
Least Favourite Divine: All of them.
Main Weakness: Never pays attention to archers.
Main Strength: His strength and fast reaction.
Goal in Life: To destroy Cyrodiil. (Yes only Cyrodiil because he doesn't hate other provinces.)
Why he was sent to jail: For killing someone important from The Summerset Isle and refusing to admit it.

Edited the post so I could add a screenie of him. 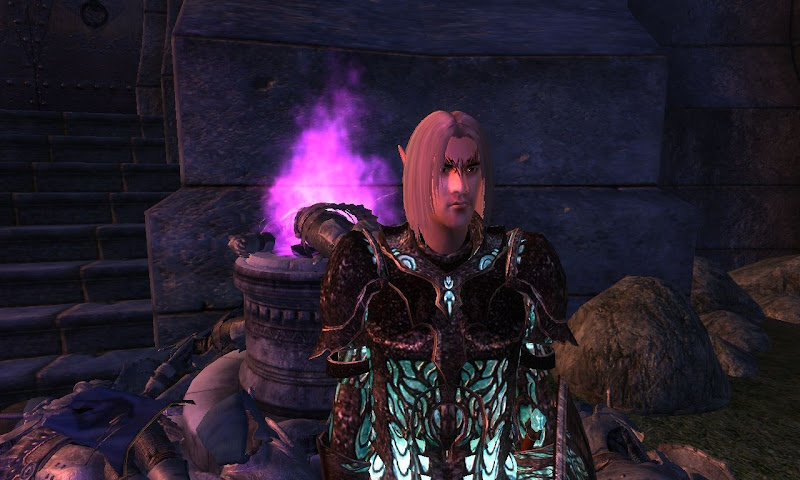 Lol forgot to say that in my first post very nice characters everyone here has. It's always very interesting to read about other people chars.
@LordFrostcraig in your screenshot it looks like Nathan is barbequeing that guard.

yeah, I didn't want to spam post here or anything, but I find these profiles very interesting...it's cool to see what direction other characters are going...

Corrine ran into a problem...after doing some quest mods, she's actually acquired quite a bit of wealth unintentionally. Her original goal was to steal her way to fame and fortune, but petty theft has lost it's appeal with the rewards being minimal at best. She recently sailed to the island of Slart (courtesy of the Bartholm mod) and joined the Slartholm Foreign Legion to keep herself occupied while she looks for new direction...

@LordFrostcraig in your screenshot it looks like Nathan is barbequeing that guard.

Actually he walked in front of it and I hit him, and he barbequed himself heheheh

Its really just a bunch of guys that are cloned from the barbequed guy, then I killed them with Finger of the Mountain lol. I couldn't resist doing it...

Name: Jangle-Tail
Gender: Male
Race: Khajiit
Starsign: Warrior
Class: Custom: Renrijra Krin. It's still being perfected but is a Combat class with heavy Stealth leanings.
Homes: Bravil House, Waterfront Shack.
Favourite Land: Topal Bay and West Weald. Mountains are fun to explore too. But cold.
Best Friend: Amusei, Methredhel, Dar-Ma, Volanaro and J'Skar.
Worst Enemy: The Plotius family. Pretty much every Legion officer ever.
Combat Preference: None. If he has to, Stealth with Magic as support. He'll settle on stabbing things if it's a rat or mudcrab.
Combat Style: Use magic and stealth to avoid conflict. If that doesn't work, Paralyze and run away. if that's not an option or if he thinks he can take them, either use a bow or a Bound Longsword.
Greatest Fear: Undead. And Drueghs. Oh gawd, Drueghs. D:
Greatest Want: Shinies. And for the Empire to leave him alone and go away.
Physique: Scrawny. He's stealthy by necessity.
Level: ~20
Joined Guilds/Factions: Thieves Guild and Dark Brotherhood, but only to have access to certain stuff. Joined the Arcane University for access to more of that sweet sweet magic.
Enemy Guilds/Factions: Blades, various Knight Orders.
Childhood: He was born in Leyawiin. His father was a smuggler and was killed in a deal gone bad. His mother moved him to Bravil, as she didn't want him to be exposed to the negative racial tension in Leyawiin.
Teenage: His mother got sick and died during an epidemic. J-T became a begger to survive for a while, until he was taken in by an Argonian family.
Preferred Food: Meat and fruit
Disliked Food: Anything with Damage effects
Favourite Arrow Type: Amber
Favourite Blade Type: Orcish or Daedric
Spells: He's not much of a mage, but likes studying magic in his spare time when he can find books. He uses Illusion the most and likes Telekinesis too.
Friendly Races: Khajiit, Argonians, Orcs, and Minotaurs (he sees the Minos as another beast race. "Bovimer"?)
Neutral Races: Bretons, Redguards, Nords and Bosmer. (his dad was a Bosmer but they're kind of annoying...)
Hostile Races: Imperials, Dunmer, most Altmer. There are specific exceptions though.
Favourite City/Town: Bravil, as it's where his adoptive family is. Chorrol for the niceness and prettiness.
Least Favourite City/Town: Leyawiin. Full of racists and bad memories.
Favourite Daedra: Azura, Meridia, Sanguine, Nocturnal, Vaermina, Malacath and Sheogorath.
Least Favourite Daedra: Dagon, Mephala, and Boethiah
Favourite Divine: Dibella, Kynareth, and Mara
Least Favourite Divine: Julianos and Talos (the feelings are probably mutual)
Other Gods: Being an unrepentant criminal, he worships the Khajiiti gods Rajhin and Baan-Dar, as well as preferring the Khajiiti versions of the previously mentioned Divines: Marz and Kynarthi.
Main Weakness: Physically weak.
Main Strength: Crafty and willful.
Goal in Life: To live easy. And acquire many shinies.
Why he was sent to jail: J-T was (and still is) a member of the Renrijra Krin, the Khajiiti terrorist/smuggling organization. He was captured during a mission.


Here's a screenie I took in the sewers. He cuts you.

Back to Oblivion Spoilers