Plainly put, I would like the see the Soul Edge and Nightmare's basic armor from Soul Calibur II implemented into Skyrim. Since so much of Skyrim's lore is based around strong-willed warriors, struggles of light and darkness, and the involvement of souls, I feel it would be somewhat fitting to find out that this ancient evil crept its way into Tamriel to consume the souls of unwary and unwitting adventurers and sellswords.

Soul Edge would be a two handed sword with roughly 1.5x the strength of a Dragonbone greatsword. In exchange for this immense power, every successful blow using the sword would drain seven points of health from the attacker. I believe this recoil effect could be done easily enough by adding an enchantment based on the extra damage enchantments, setting it to hit the health of the user instead of the enemy.

Nightmare's armor (referred to in-game as "Azure armor") would have stats roughly equivalent of the Daedric set, since both were formed through unholy magic and forged with powerful metals as the base. Wearing the full set grants the user a chance to inflict Fear on any enemy striking them, or that they strike.

Obtaining these powerful items should be no easy task; simply allowing someone to craft them at a forge seems both silly and imbalanced. Instead, it seems more sensible to have Nightmare awaiting as an enemy to defeat in the Reaper's chamber of the Soul Cairn (or possibly one of Vanilla Skyrim's Draugr dungeons, to allow for those without Dawnguard to access the set).

Nightmare himself should be of equal level to the player, and could use an edited Vilkas model (change skin and eye color). He would borrow from the AI of a Draugr Deathlord, but using Fire Breath instead of Ice Form, and rather than Disarm, he uses Become Ethereal. He could use the Miraak voice assets to have these work properly. (these could be loaded as custom assets, to avoid requiring Dragonborn DLC content).

I do understand that it's unlikely that anyone will take this up, and yes, I do know of the two Soul edge mods available on the Nexus. However, one is of fairly poor quality, and both seem to have been abandoned by the author, so it would be wonderful to finally see justice done to this marvelous concept and bit of lore.

I may, someday, see to this mod idea myself if it doesn't get picked up by someone beforehand. However, that's a fairly slim possibility, considering recent (and potentially permanent) conflicts of scheduling and interest. So for the time being, the task falls to whatever intrepid mod author happens upon this page and decides to give this a go. I thank anyone who's bothered to read through this entire spiel of mine. 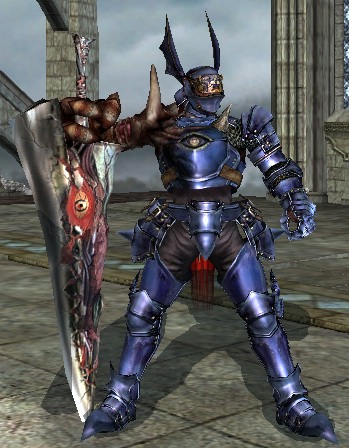 Honestly not surprising. I suppose this will just have to wait until I decide to pick up the creation kit myself.

Can't wait until it comes out

The design from Soul Calibur 2 is my favorite!!! I'd love to have this armor in Skyrim!

I got one of the Soul Edge mods on Nexus but failed to find an armor similar to Nightmare's.

It would be nice if the pieces of the armor could be found in a location designed after Ostrheinsburg castle and/or chapel? Unfortunately the Creation Kit dosn't work for me ... would have tried, but you could do it!