53 replies to this topic

Hello! Excuse my English. I want to appeal to all modders. I've been playing "Oblivion". The number of plug-ins for this game is great, but I still can not find this medieval clothing. Agree that it is foolish to walk Tamriel in jeans or shirts. What they are doing lately ashamed to wear, not to mention the fact that in this walk. In the category of "clothes" in the main only - shorts, tights and underwear, men's medieval clothing normal at all. Maybe somebody will try to make medieval clothing store.

I agree with you - more medieval clothing, although I suggest late Medieval / early Tudor to narrow it down a bit.

Early to mid medieval clothing looks a little odd to our eyes, as the idea of separate sleeves hadn't come into use - and so the shoulder areas tended to look very odd and be awkward. This is an example based on Saxon clothing.

During the 1300's, sleeves as we know them became more common, so clothing based on designs from 1400 onwards look "better" to the modern eye. 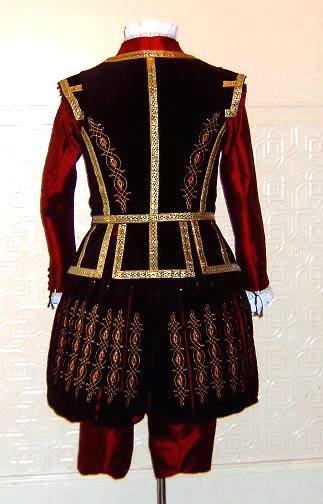 The original clothing in Oblivion is mostly based on a simplified English Tudor-looking style, so dating from around 1500-1600 A.D. (which is a little later than Medieval, which runs from around 450 A.D. to 1500 A.D.). That is why the male trousers tend to reach mid-calf and not the ankle which is the modern fashion. However the bulging pants which made all men look like they were wearing a toddler's nappy were avoided, so we can assume early Tudor at the latest.

Yes agree, might be clothing of the Middle Ages is not as pretty, but you can use the time span of 10 to the 16th century or to the Renaissance - Cotta, tabard, surcoat, doublet, zhippon.

Remember that any clothing you pick can only be applied as Footwear, Bottom-half wear, Top-half wear, hat, and gloves - there are no more easy-to-use slots. Capes can be added using a spare jewellery slot, but not if you want to wear the jewellery too.

I also would like more clothing in thy olde medieval style. I jump in and offer texturing services, if you need them.

I also would like more clothing in thy olde medieval style. I jump in and offer texturing services, if you need them.

And I second this motion. If a group arises to perform such a service as to tailor us fine garments I am more than willing to dye them appropriately

There where a few projects dealing with knight armor and clothing stuff, but they died. I hope for Skyrim People will make more european middle ages stuff like The Witcher had. I'am already thinking about hireing for such purpose.

OK - we have a couple of volunteers for re-texturing work. So, let's try to define the scope of work more carefully.

First point: Which Body or Bodies? Much simpler task than with female characters as there are only two main male bodies - Vanilla Oblivion and Roberts Male (although Roberts V4 and Roberts V5 may need different clothing - can anyone confirm or disprove this?

Second point - a list of what exists in-game already - http://www.uesp.net/...livion:Clothing

Thirdly - adding items as aquirable one-offs for the character's own outfit, or adding them to the levelled lists and to the general population?

Fourthly - There needs to be a female version of EVERYTHING you make (as outfits are generally not gender-specific and need both male and female versions or you get some very "odd" outfits), and THEN you start needing to support the assorted female body types: Vanilla, UFF, Roberts female, Exnem's, HGEC, TGND, DMRA, etc. ad nauseum.

My suggestion is to look carefully at the existing list of clothing, and see how many additional items can be created by just re-texturing "stock" clothing - hopefully that'll mean only having to create 7 new textures per item of clothing (Vanilla Male / Vanilla Female / Roberts Male / Roberts Female / BAB / UFF / Exnems/HGEC variants ) as the underlying meshes already exist in stock clothing replacer sets.

Additional armour is a whole new ball game, and should probably not be lumped in with the stock clothing.

Nice essay mate. I've got a good few hours of boredom coming up so ill look into medieval clothes, current cyrodiil clothes and what retextures i can do.

Back to Oblivion Mod Requests