I have created a custom race mod designed for replacing bandits thus becoming the ultimate enemy.

However, as I started to change every bandit npc's race to my custom race one by one ( yep, boring as f*** ) , I encountered that MOST of them cannot even be changed, plus they are fox race lol

Is it a glitch or something, or is there a workaround ? I post a screenshot. as you can see, their race are foxrace which is really wtf as they are humans in game, plus their race cannot even be changed. Any ideas ? 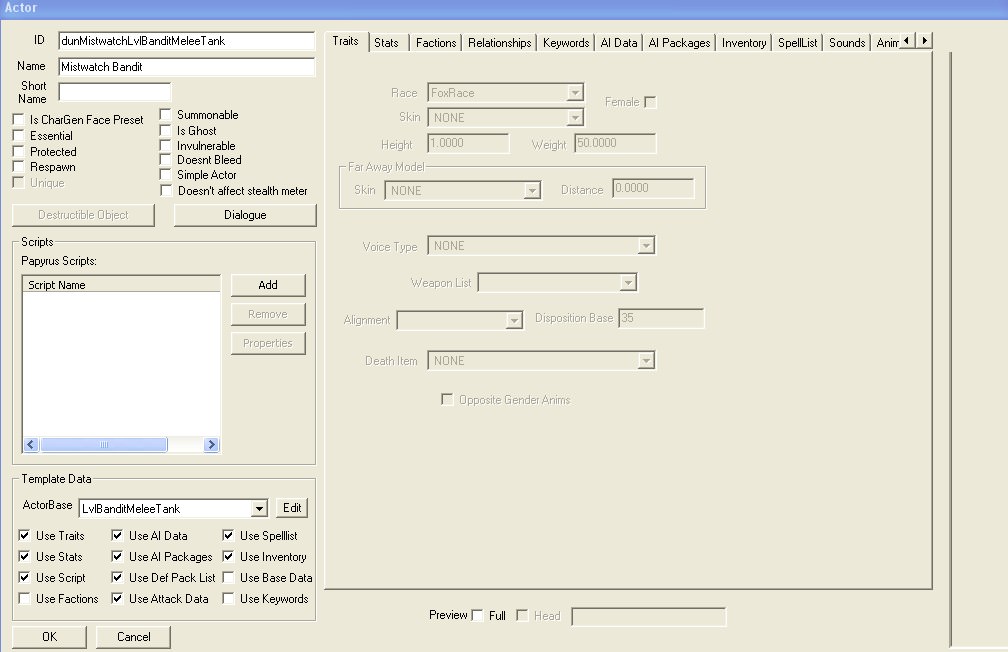 Instead of changing the existing bandits , make your own versions of these actors

then just remove bandits from the spawn lists , and add your versions instead

do note that this may cause issues with specific spawns (like quest related spawns) , so be careful about it

"Fox race" is the default race just because it's first alphabetically; race is one of the few fields in the CK with no "none" option. You can't create an actor with no race. It's grayed out there because it's not applicable to that character record.

At the bottom left where you see "actor base," that's your issue. The characters that show up as "fox race" are using a template and they pull their actual race from the template NPC. In the case of your screenshot they are pulling from a leveled NPC, meaning their appearance and varying other stats will be pulled from a leveled list of random characters. And that means they can't be edited in that character record. Only the unchecked boxes in that lower left area can be edited for this copied NPC. In your case you are able to edit "base data" which means their name among other things; this could be used to create a named NPC with a randomized appearance. You could also edit that character's keywords and factions in this case.

Of course you can change those checkboxes, but it's not usually a good idea. What you probably want to do is edit all the TEMPLATE NPCs, then those changes will carry forward to every randomized NPC. You really don't want to un-randomize those NPCs, or you'll end up with LESS variety in your game, i.e. a room full of bandits with the same face, inventory, stats...

It is not necessary to recreate the leveled lists if you edit the characters in those lists.

Out of curiosity, was this mod ever finished?