9 replies to this topic

Hi, so I am working on a house for my follower. I have done inside navmeshing but only in new cells so haven't had a need to tinker with vanilla cells or navmeshes. So I am at a loss now, my follower's house is in an exterior cell. I have flattened the ground so that I could place the house but the navmesh itself is left untouched. I don't want to mess anything up. How would I best go about this? I would like to just move around some bits and finalize but it would look sooo ugly and might make followers act weird.

I found this advice on another site:

I'm not an expert, but I've been fighting navmesh issues with my Helgen Rebuilt mod for months. Here's a few things I've learned or have been told to do or not to do.

1- NEVER delete an island navmesh. Move it underground. Also, NEVER connect an island navmesh to a non-island navmesh. This essentially deletes it because it is no longer an island if it is connected back to a normal navmesh.
2 - Wherever possible, try to just move existing verts around to accommodate what you're trying to accomplish.
3- Others may disagree with this one, but in certain places, I try to use primitives set to L_NAVCUT to cut the existing vanilla navmesh where I place objects in the middle of a navmesh. For example, say I place a tree somewhere that's already navmeshed, I can select the tree, click on the create trigger button and it will draw a primitive around the tree. Make sure it is penetrating the navmesh, and set it to L_NAVCUT, and it will cut out the navmesh where it goes through it.

Image of my particular scenario: 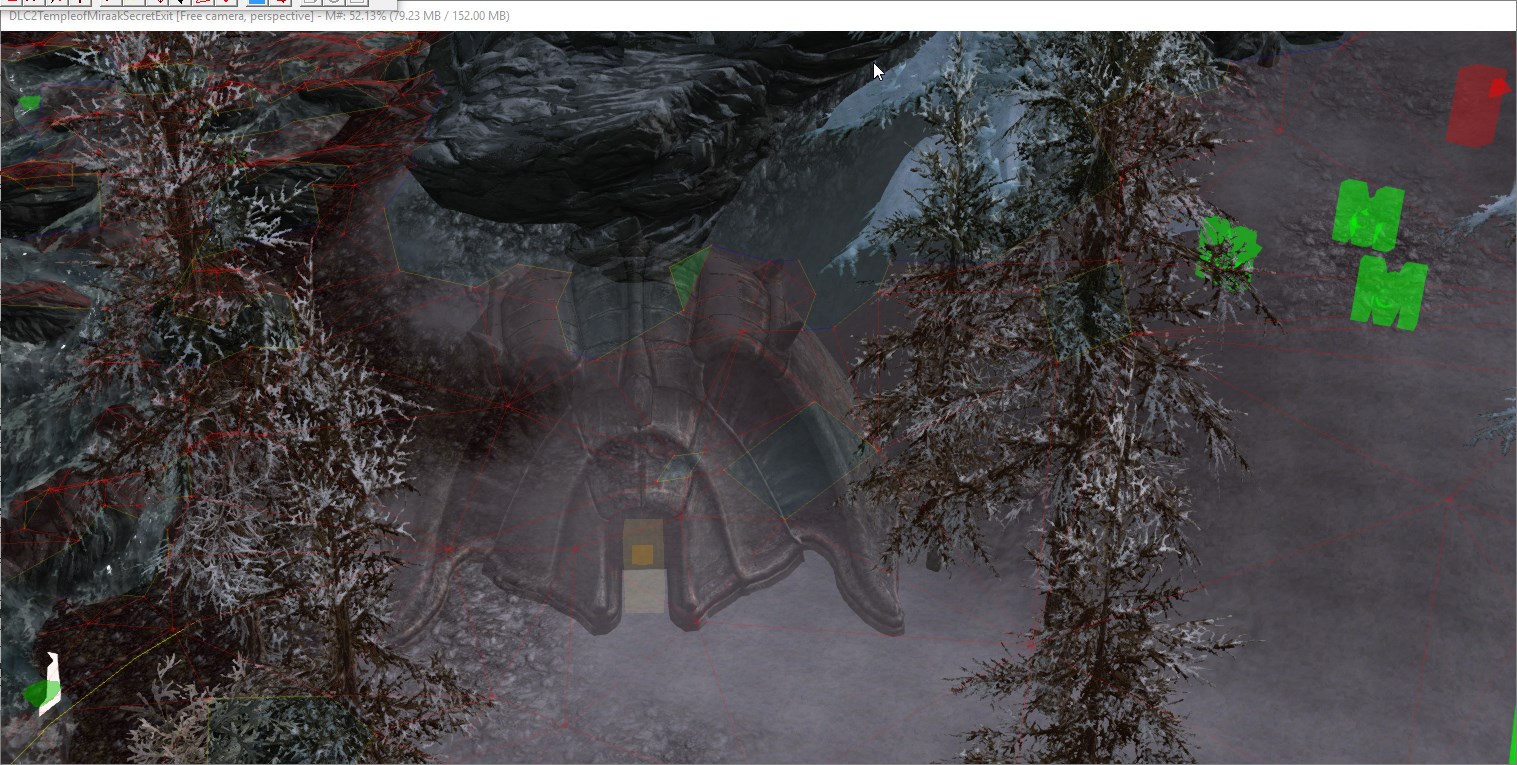 If you haven't done too much landscaping or moving stuff around, just flood select the mesh and drop it to the new ground level. Move vertices to suit, make holes for trees and such. Then finalize and check the navmesh. That should eliminate any "deleted navmesh" issues and hopefully, won't confuse pathing for NPCs. As always, make a backup of your mod first. Just in case...

If you are like me and tend to go a bit wild with the landscaping, then it's sometimes easier to delete all navmesh for the cell and make a new one from scratch. You then need to give the new one the ref ID of the deleted mesh. Easy done in TES5Edit.

Hope this is of help and not too confusing.

I've seen others say that you can rebuild it from scratch but the river to the left looks really complicated, so not sure if I dare try it. I have only flattened the immediate area around the house nothing more, so going to put a stop there, no need for any more.

Is it possible to drop perhaps the area before the river and make a new navmesh that cuts right into the vanilla one? Thinking it could bridge the gap perhaps.

Rivers can be a bit fiddly. Vertices can tend to go to the surface when trying to place them, if the camera is to high. I like to navmesh to the water's edge and the move the water aside. The I can do to the riverbed / pond without issue.  Just set the triangle type to water "o" button from memory. If you want to just redo a section, delete want you don't want and replace. That is not a problem.

"Is it possible to drop perhaps the area before the river and make a new navmesh that cuts right into the vanilla one?"

Do you mean adding a new section to an existing one? If so, yes.

I was thinking to interject a navmesh into the vanilla one but if it's possible to do so without connecting. Like having it clip int other vanilla one. Npcs can't start walking down to the lowered vanilla navmesh. I think I am confusing myself.

I'll try your suggestions out later today. With a backup of my esp of course.

I see what you mean. It would be like an island navmesh. I don't think NPCs will use it unless they are flung, spawned or teleported there. I have considered experimenting with that idea to make them appear to walk on water or through the air. Don't know if that is possible without a collision surface... Now I'm pondering aloud. It must be near my bedtime. Feel free to PM anytime.

Here are a couple things that might help.  Seems to be the way to modify exterior navmesh.   First is Skyrim, second is FO4 but is where the author of the first found out how it works.

Here are a couple things that might help. Seems to be the way to modify exterior navmesh. First is Skyrim, second is FO4 but is where the author of the first found out how it works.

Thanks, I'll check those out! :thumbsup:

The Arbiter of Time

Wow that is brilliant, and the final piece of information I need to tackle exterior navs.

Haha, I had found the first video on my own earlier, but wasn't sure if I could trust the information. Seems I was mistaken hehe

Back to Skyrim Special Edition Creation Kit and Modders