2 replies to this topic

While creating my module, someone advised me to convert all placeables that aren't interactable/objects/transitions into environmental objects instead. This is for a module that's going to be hosted as a server, and I'm told that it's because placeables constantly have to transmit their state to the network which may affect performance.

Is this true? Will converting my placeables into environmental objects help optimize performance on a server module?

I haven't seen anyone say what you're describing, but my experience is limited.

As an illustration, here's a screenshot I took, showing a baked walkmesh. The clean, simple white- and blue-lined shapes are the objects that I converted to environmental objects, and blocked off with walkmesh cutters. The shapes with the dozens of black polygons in them are static placeables. This says to me that the placeables use a lot more polygons for their walkmesh collision than the environmental+cutter combination do, which means better performance for the environmentals. 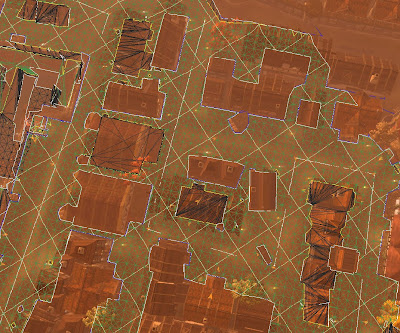 As usual, I hope others will answer if they have more info.

Yeah that's perfect, I ended up converting most of my things to environmentals and placing the walkmesh cutter. Thanks

Back to NWN2 Mod Troubleshooting