15 replies to this topic

I've been having a problem for some time where weapon attack speeds will randomly change for no apparent reason.

They usually seem to go up to a specific, absurd multiple of their original speed. From there, behavior starts to get really weird. Some won't play audio when fired. Most won't actually attack at that speed, but some will. Changing weapon modifications that involve attack speed will sometimes fix it, but not always. It happens to just about anything, at seeming random, and the only reliable way I have to reproduce it is "wait and see".

I believe this may be linked to my attempts to rebalance weapon receivers to use specific fire rates, in line with Bethesda's RPM attack loops (for 420, 540, 660, 780, and 900 RPM). The problem is that I just don't know how it could be causing this, why, or how I can achieve that goal without this happening again.

I'm absolutely stumped. Does anyone have any idea what to do here?

heya Papvafs.  Ok, I don't know the variables that you are talking about in receivers.  But if you start going and tinkering with a gun, and it starts going hayewire, it's pretty sure that you did something wrong when you were tinkering with it.

Can you post a screenshot of the values that you were messing with?  The ones that you've modified, vs the vanilla ones?

I've been working with the fspeed setting in the weapon mod objects. Here's a comparison for the 10mm pistol's mod_10mm_Receiver_Automatic1_and_MoreDamage2. Vanilla is on the left, mine is on the right. 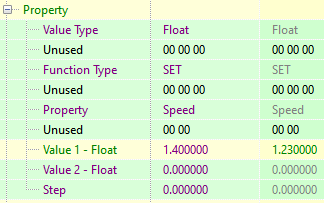 This is just one reference. I've done a lot elsewhere, with different rate-of-fire values for each receiver. For example, here's mod_10mm_Receiver_Automatic1_and_MoreDamage1_and_ArmorPiercing. 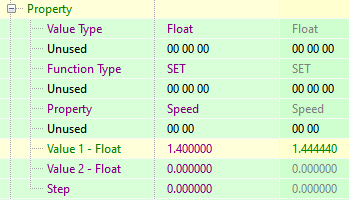 Most vanilla receivers don't have fspeed modifiers, which I added to. I didn't add to all of them, as the default RPM is 540, which is in line with my mod's goals. Some originally had modifiers, like the Nuka-World AK and the vanilla 10mm pistol, but those were removed or altered by my mod to fit the new norm. That means I can be sure that the fspeed modifier works, but that I'm not applying it correctly, or that something else is going wrong along the way.

I've made a bunch of other tweaks to the weapon mods, but none of them have any impact on rate of fire. I've done tests to isolate the fspeed modifier as the culprit, but I've got no idea how to make it work as it's supposed to.

Hmmm.  Ok.  So the values that you're working with aren't hex strings, like I had wondered about.  Those look like normal lines of numbers, mixed sometimes with letters.  And it takes a lot of trial and error to figure them out, if you don't know the references.

There's two...three, three things that I can think of.   1) You've accidentally added the tweaks in somewhere that they shouldn't be.

2) There's a missing element like a "trigger" flag that causes them to jump, that neither of us knows about.

2A) Perhaps situational, and perks are having an effect on them?

I've messed around with some of the speed settings for some of my guns too.   But not in the way that you are.  And I only practice mine in semi-auto.  I've noticed, that if I'm indoors, and firing at a target somewhat close to me, my fire rate is... well... really nice.

The further away my target is, the more my trigger speed slows down.   The same depending on how much stuff is loaded in the cell with me, if I'm outdoors.  But that, I'm thinking may be due to lag in fps drops.

I have also noticed tho, that if I apply my tweaks to weapons that aren't meant to be regular semi automatic, (The bolt action rifle is what I'm talking about), and then remove the factor of of the bolt action mechanics.... that gun got INSANELY fast in the low count indoor areas that I mentioned before.

have you noticed a difference in how they act in different areas, at different ranges?

I've not. I've seen no change depending on performance or location. This also reflects best on the weapon's stats card. Here's a shot I took earlier: 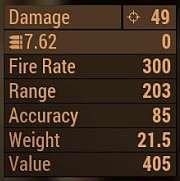 For reference, here's the same weapon with the default fire rate: 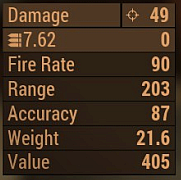 The accuracy and weight are different as I had to swap receivers to fix it. That does not, however, mean that it won't occur on the "fixed" receiver.

I've been doing tests with all of the fspeed modifiers taken off the guns. Just now, I've loaded in to find my assault rifle has a rate of fire of 300 - again. I have absolutely no idea why this is happening now. It can't be the fspeed modifiers, or there's something going on with them being absent that's turning things ugly.

Something I should note is that I've modded receivers to no longer determine the fire mode of a weapon. Fully automatic VS semiautomatic is determined by its own, common object mod that is applied in its own, common slot. I'm not sure if this would have an impact, but it's worth mentioning in case it would. I'm not sure how this would affect anything but freshly-spawned weapons, though.

Well, I'm afraid that I don't know anything about trying to match them to any specs that Bethesda has.

I only try to tweak mine, to match performance levels that are satisfactory for me.

Here's some notes that I took real fast of what I tweak on a firearm, for speed.

Weapon
DNAM Data/Attack Delay   Reduce it as you see fit

These settings result in what I'd posted earlier.

I get weird things with some guns.  Once, I edited the Jericho 941 to target the compensator .nif file as a replacement for their suppressor ,nif file.   I just liked it better.

On the already spawned guns, no difference, the mod didn't take.  I didn't spawn new ones to mod, I just said "oh well".

As soon as I DID get a new one in game that I picked up as loot, all of a sudden, my existing 941 now looks the way that I want it to.   So sometimes, yeah.

There are a few things I've noticed since I started this topic:

I'm going to make a backup of what I have and revert all of my weapon mod changes. Beyond going nuts myself and doing up some ugly restrictions on weapon sounds, this is the only option I can think of. I'm going to work from there once I've done it.

I'm still having this problem, and I've nuked most of the changes I've made. I have no idea what's going on.

If I have understood you correctly... This is a fairly well known bug that was introduced with the Nuka World dlc. It effects the Handmade Rifle, Handmade Rifle, and many mod weapons, including the Service Rifle. As you say, if doesn't normally effect the original vanilla weapons (i.e. Combat Rifle, Assault Rifle, etc.). At least, that's how I have always understood it. It's a Bethesda problem that has never been fixed for whatever reason.

To clarify, the problem is that, as far as weapon audio and the UI are concerned, weapon fire rates are shooting up to in-game values of 200 and often more. The sound played when the weapon is fired uses the maximum RPM value, so a weapon that should sound like it's shooting at 540 RPM instead sounds like it's firing at 900 RPM. On the other hand, the weapon is functionally unchanged, and still fires bullets and recoils at the speed it's meant to.

As mentioned, yes, it only seems to affect DLC and mod weapons. I see no changes to the 10mm pistol, combat rifle, and so on. I noticed this problem start cropping up when I first started experimenting with weapon rates of fire, but I thought I was just goofing something with values the game didn't like. Now, it feels like it's been cooked into my plugin somehow, and nothing I've done has helped fix the problem.

If what you're saying is true and it's just a base game bug, I'm honestly relieved. I was ready to lose my mind over this. I was nearly ready to burn half my work and kill all my weapon changes just to get it to cooperate. The only solution I have left is kind of hacky and doesn't alleviate the UI problem, but it's better than tossing the baby out with the bath water. I'd planned on splitting up the different RPM sounds to use individual keywords instead of the dynamic vanilla system. It's ugly and I hate myself for it, but it's better than weapon audio being soundly broken.

With all that said, if anyone has a more elegant solution to this, I'm desperate for something better.

I'm not sure if this is the exact same bug that you are having, but I suspect that it may be related, and then made worse by some of the changes that you have made?

Back to Fallout 4 Mod Troubleshooting