Hello everyone, I'm new to using it on Mod fallout 4. I want to achieve a balanced graphics performance. What graphics mods should I use with the Rx 570 4gb?

First you should get FO4 running stock.  Resolution might be the largest render load.  1920 x 1080 is fine, it relies on post processing to clean it up.  Here that is TAA.  Then technically you only need 8x anisotropic filtering;  it's a distance setting.  I think 8x Af covers everything from 0 to 50 feet away or more like the immediate area of the player.  See, the further away a texture is from the camera the more blurry it becomes, and the AF cleans that up.  2020 from O.C. benchmark competitions we switched from using High Quality Anisotropic Filtering to Quality, and then to performance.  These little things add up, and when the real heavy load hits the computer; because you got ready before there is a amount of overhead that keeps your framerate steady.


Frame rate is actually what you have been playing on.  It takes a little while to get used to drastic changes in frame rate.  Because of that people that play on 60Hz to 100Hz end up taking a look at good old industry standard 30Hz, and they freak out.  It's also the reason people chase the dragon going above 100Hz because nobody can tell the difference above that; well at least nobody that is just doing this for fun at their house.  FO4 was made to run at 30Hz.  I like 30Hz cause it's easy to film, but I keep it when I'm not filming because that is what a video game should look like.  In extremely heavy combat; when the player has actually started a war in the game there are times if the player is mentally focused on a tactical assessment and application, 60Hz 75Hz 100Hz.


That is only if you drastically increased the spawns, so instead of 9 Raiders it was 50+ Raiders.  Sections where tactical application is being performed to clear the room; there is a delay in aim on a 30Hz set up which is only a slight problem.  So it's really a tactical choice, but the only problem is this isn't DOOM or Wolfenstein.  FO4 isn't a shooter, it's only a slight improvement on a old garbage shooter.  It's not competitive in anyway.  But you could argue the merit to playing FO4 in that super fast pace GOT TO GET THE JOB DONE, OMG OMG, HURRY HURRY HURRY!  Me: I just live in the wasteland, and for the last 39 years.  I started learning how to make mods 10 years ago.  Now I make whatever I want just for me most of the time.


FO4 was a minimum 570 GTX  I think.  It would just barely do it, and in 1080p.  Even that slow card was able to use Subtle ENB.  You should have been there, you would love it.  The game was hyped to look one way, and the reality didn't look that good.  The game looked horrible.  Vogue ENB and Subtle ENB are designed to correct it so it looks like as advertised.  Vogue ENB started getting really fancy though.  Subtle is the go to because it sets the standard for great looks and great performance too.  Then the frame controller built into FO4 sucks.  You know, it prioritizes streaming/culling instead of the actual framerate.  To them the frame rate can be 40 to 60  (and that's okay to them)  40 to 60 isn't good though, it isn't stable.


So we derail that train, make it crash into a school full of small children.  Your RX 570, go into the settings for FO4, disable Vsync.  Then we'll use the configurator to disable it on the engine.  Then use Riva Tuner Statistics Server to control the framerate.  The Witcher III and FO4 both run smoother if we run it through Riva Tuner Statistics Server.  Bandicam has a frame counter, easy to use.  I use that to film, but the frame rate indicator is helpful too.  There are others.  I'm sure you have that under control and keep a eye on your temperatures from time to time.  Then FO4 Tweaker. 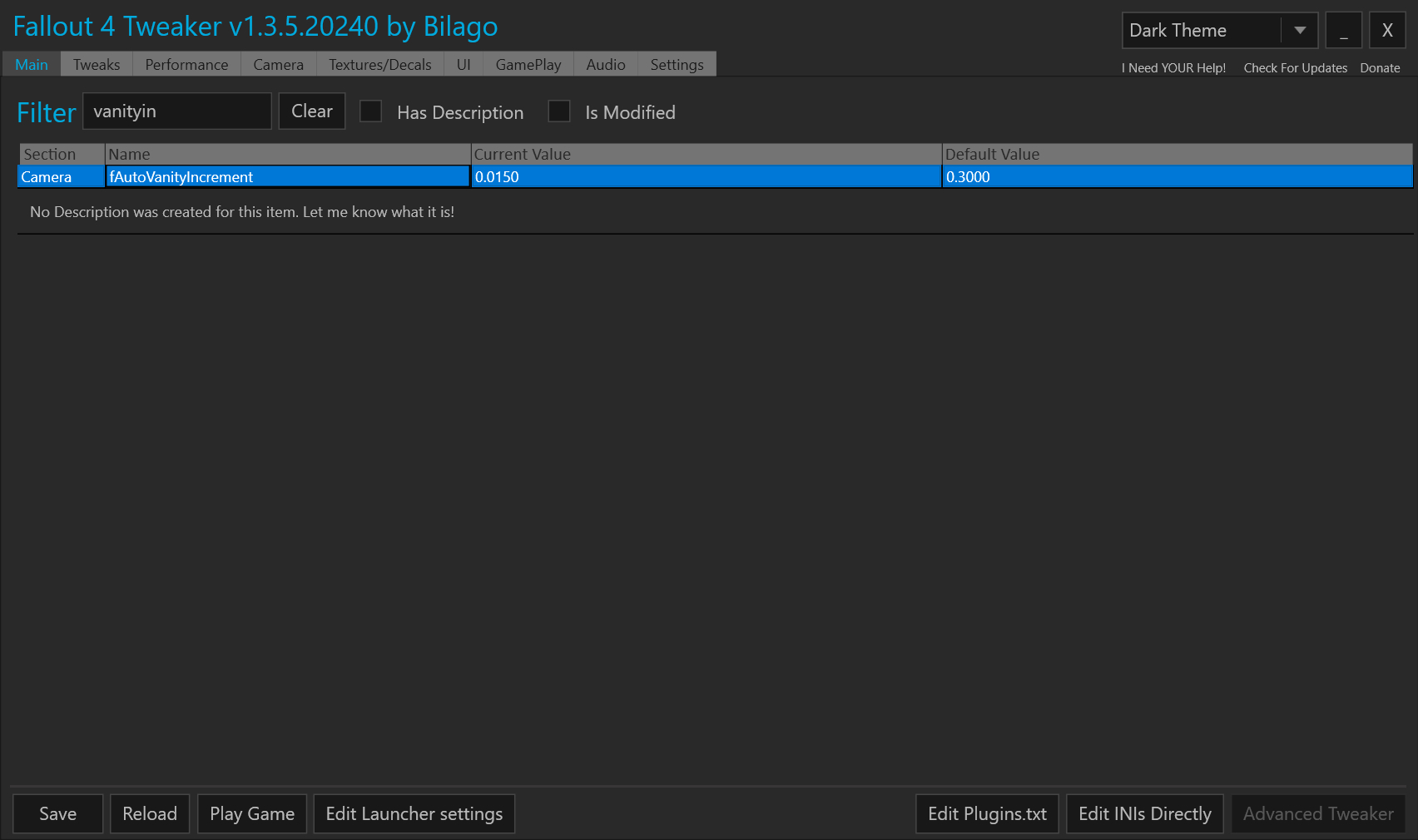 Slows down the rotation on the screensaver.  Fun to just let the camera spin slow. 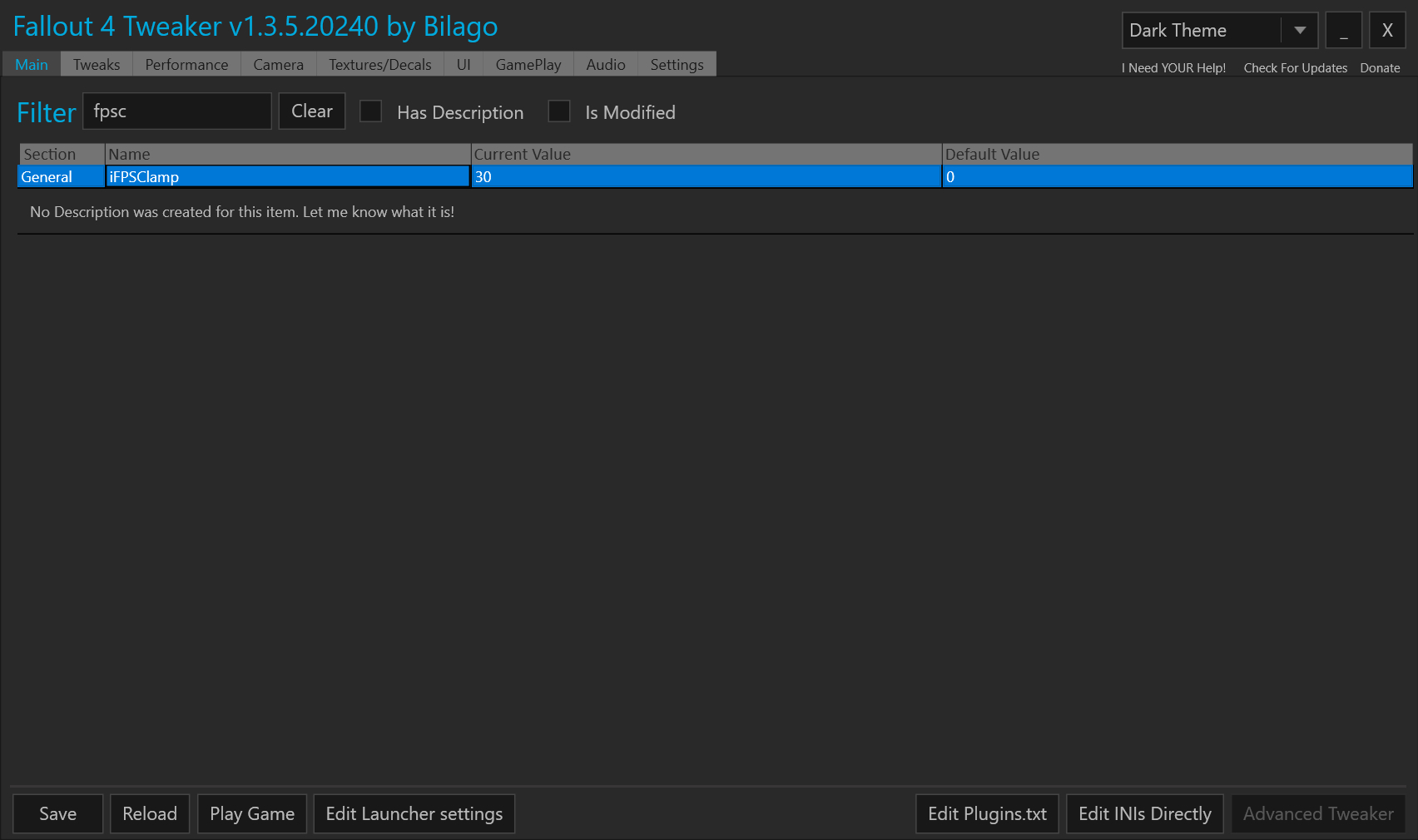 People don't know this, but iFpsClamp is set to 0 to clamp physics to the refresh rate, that's 60 times a second at least that physics are being calculated, lot of numbers, bunch of math.  Anyway, here because I want to run a 30 frame rate or whatever, for a specific frame rate, instead of the refresh, the clamp here will clamp the physics calculations to my frame rate. 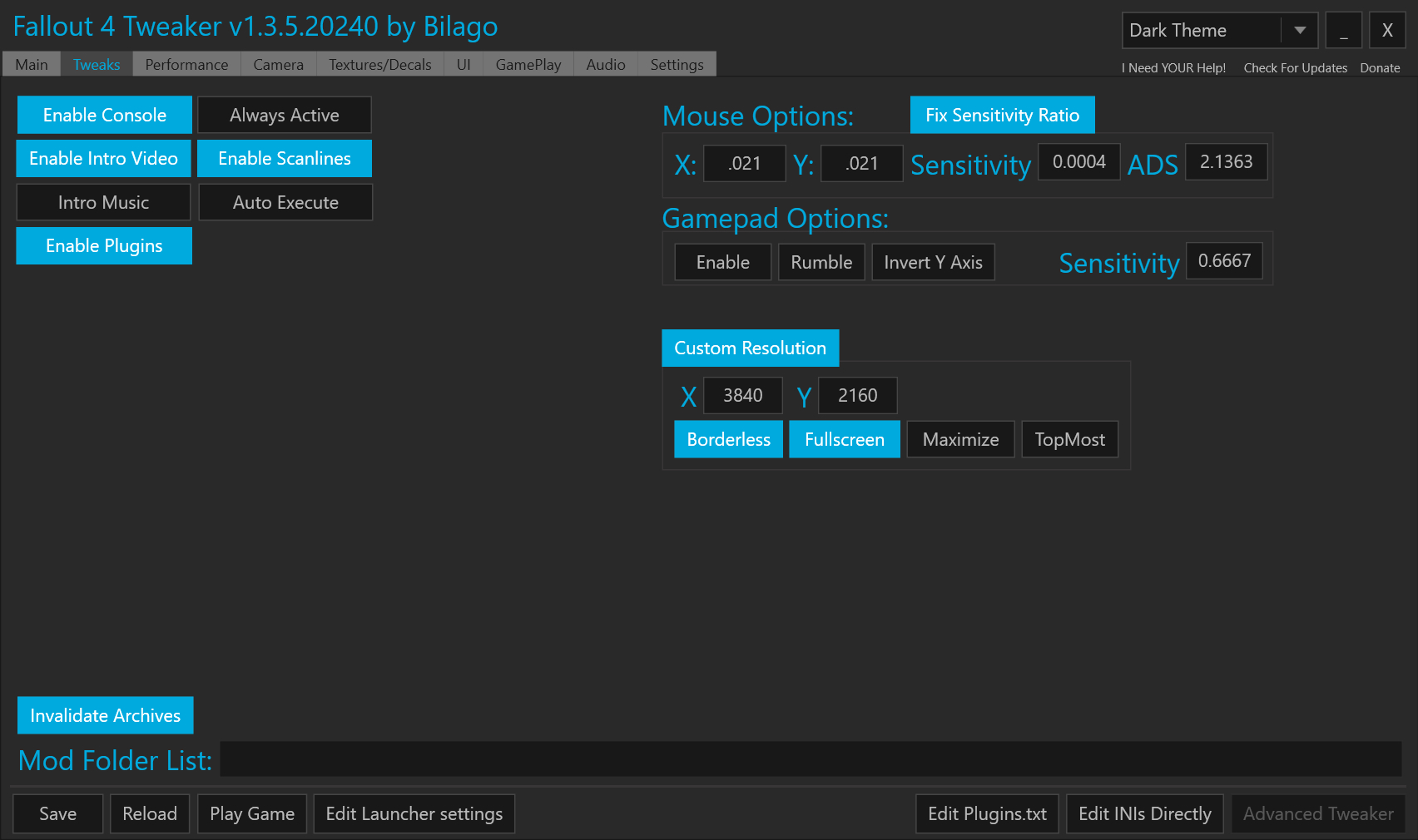 Dumb stuff we have to do to get the game playable/modifyable. 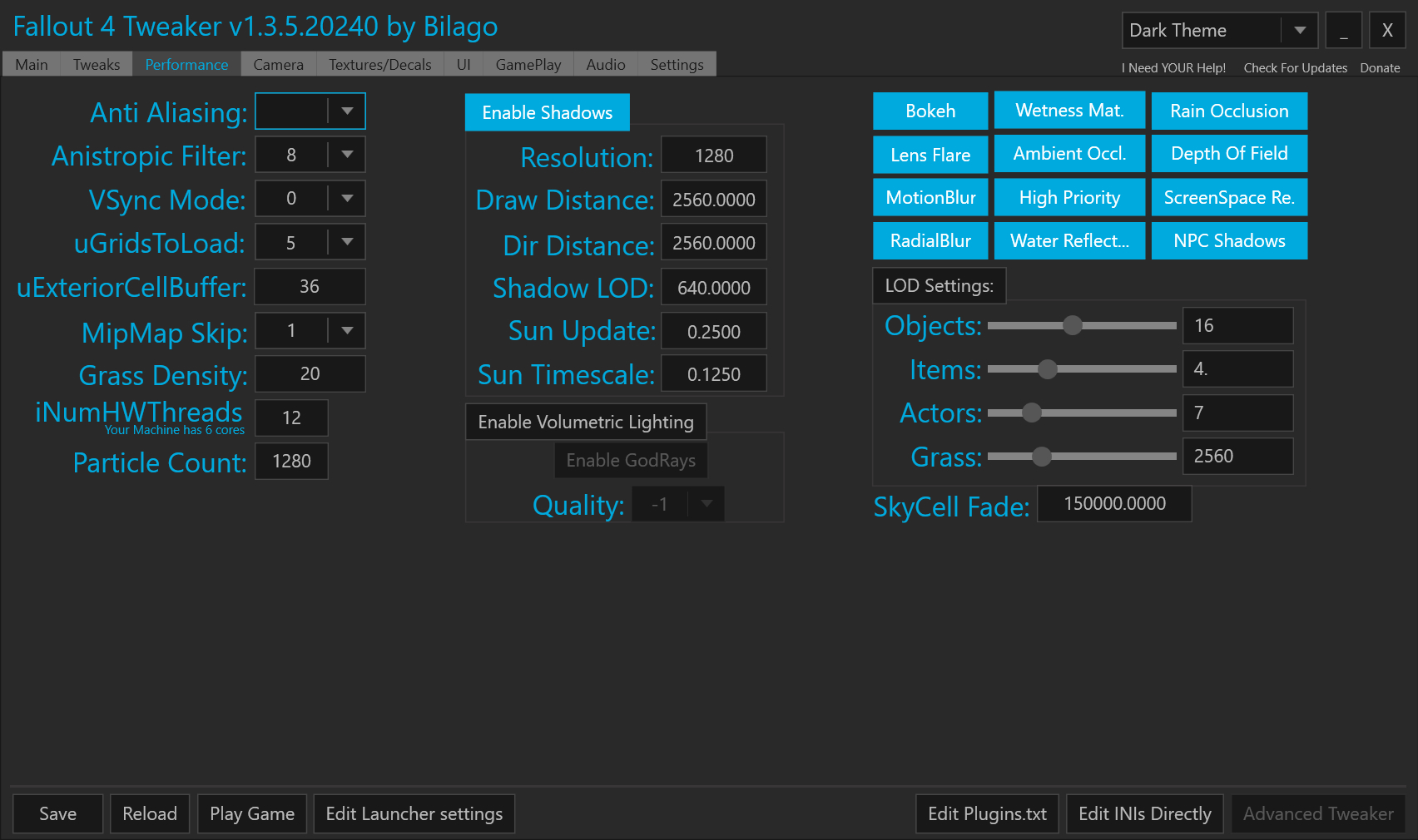 I tried to get it close to what I would run on a RX 570.  Not much changed from what I run on a 2060 RTX.  MipMap Skip is set to 1 to lower textures from 1 above ultra to ultra, and the 1 here for High.  Because the textures are too large, and streaming takes care of that anyway most of the time.  Sometimes I might run a -1 or 0, but mostly I leave it on High.  That was true for 1080p and 2160p.  It just, doesn't matter.  There are only a few places that need some more detail, and I usually ignore those.  I'll fix it later, because we can just reskin it to whatever, which brings me to advise you to pick the lowest detail for mods  512 or 1k, but you can take 2K if you want, just not 4K or 8K.  Here by picking 512 or 1K you kept the game at a very high performance level, and this allows you to have more fun with chaos or complex mods.

2560 shadows or 2048 if 2560 was too far.  The 2560 is just shadowing the Red Rocket gas station.  That amount.  Because GTA V does that, makes high performance shadows.  But here the Shadow LOD 640 pushes the max detail way farther than GTA V.  You can start with 1280 shadow maps,  where it says Resolution 1280.  You can set that to 2048 if you want.  You can set Shadow LOD to 2560  and it will draw the whole area in 1280 or 2048.  Sometimes I try 4096, but it isn't as useful now that we have a good Shadow LOD.  1280 shadows are just a upgrade from the lowest, but it's custom, they don't put that in there for us, because it's the end user that configs it.  It should make shadows look playable, but you won't drop frames downtown.  Hence the high performance shadows here, which, if we are not going downtown, means we can bump the detail all the way up.  It gets switched however we want.

Volumetric Lighting and God Ray are both double disabled.  It's dumb.  The cascades from it tank the frame rate most of the time, but even if it didn't, it's a dumb idea.    Volumetric makes everything look too white, cause it's trying to provide a volume effect to lighting, which is done with a slight fog, it sucks.  God Rays are even more dumb.  In both cases the art department used to hand make these effects, and this is like a procedural generation of those, and one that isn't any good.  It also conflicts with AA but upgrade to 4K you won't need AA.  Still though, it's a dumb gimmick.

Grass uses 2560 because it pushes the fade out far enough away that we don't care about it.  Same reason the shadows cut out there.  2048 also works good maybe?  The important part is the Actors  which 6 is a minimum.  I use 8. But 6, 7, or 8 are all good for combat pretty much.  It's just set to minimum, because you can only see 25 cells in the game anyway.  If you wanted to double it or max it, then go out trying to shoot snipe (sniper) then you might could have some fun with that setting.  What I meant here is just basing the other settings off that.  25% sliders is like 8 times further than older games.  LOL. 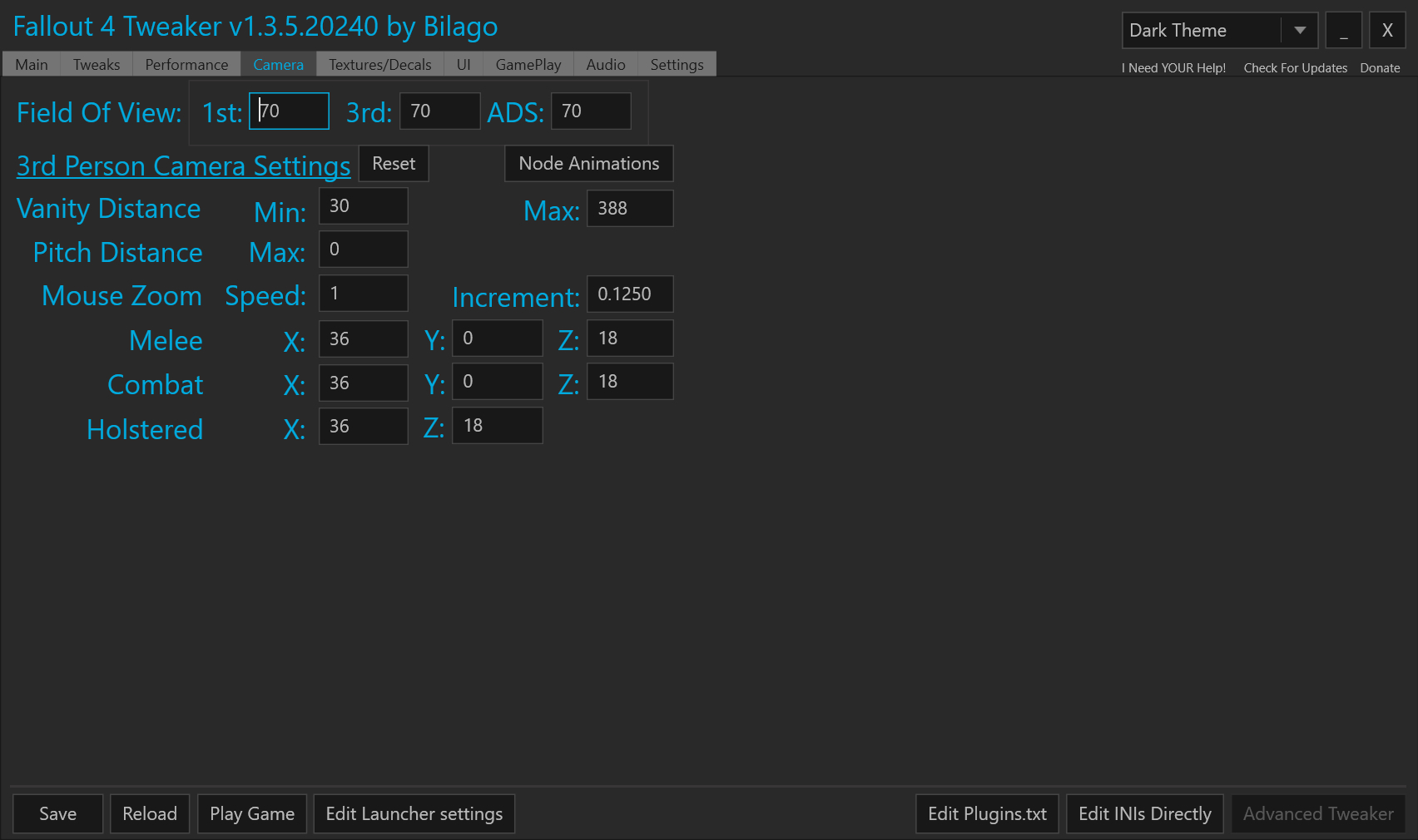 Basically a FO3/FNV camera that accounts for PA being about a foot taller.  So zoom all the way out is head to toe in PA.  Then zoom in 1 and that is head to toe on foot.  The 70 FOV is changed from the vanilla 80,  because I don't like changing from 70 to 80 or whatever,  I want the FOV to stay the same.  Here I picked 70 because that optimizes the game.  Less to render, less errors, cause the game wasn't built to use 90 which sucks I know, but here we can gain some high performance which is why I use it.  3rd person, 1st person, Aim Down Sights,  it's all 70.  Then the 30 min looks cool in 3rd person iron scope. 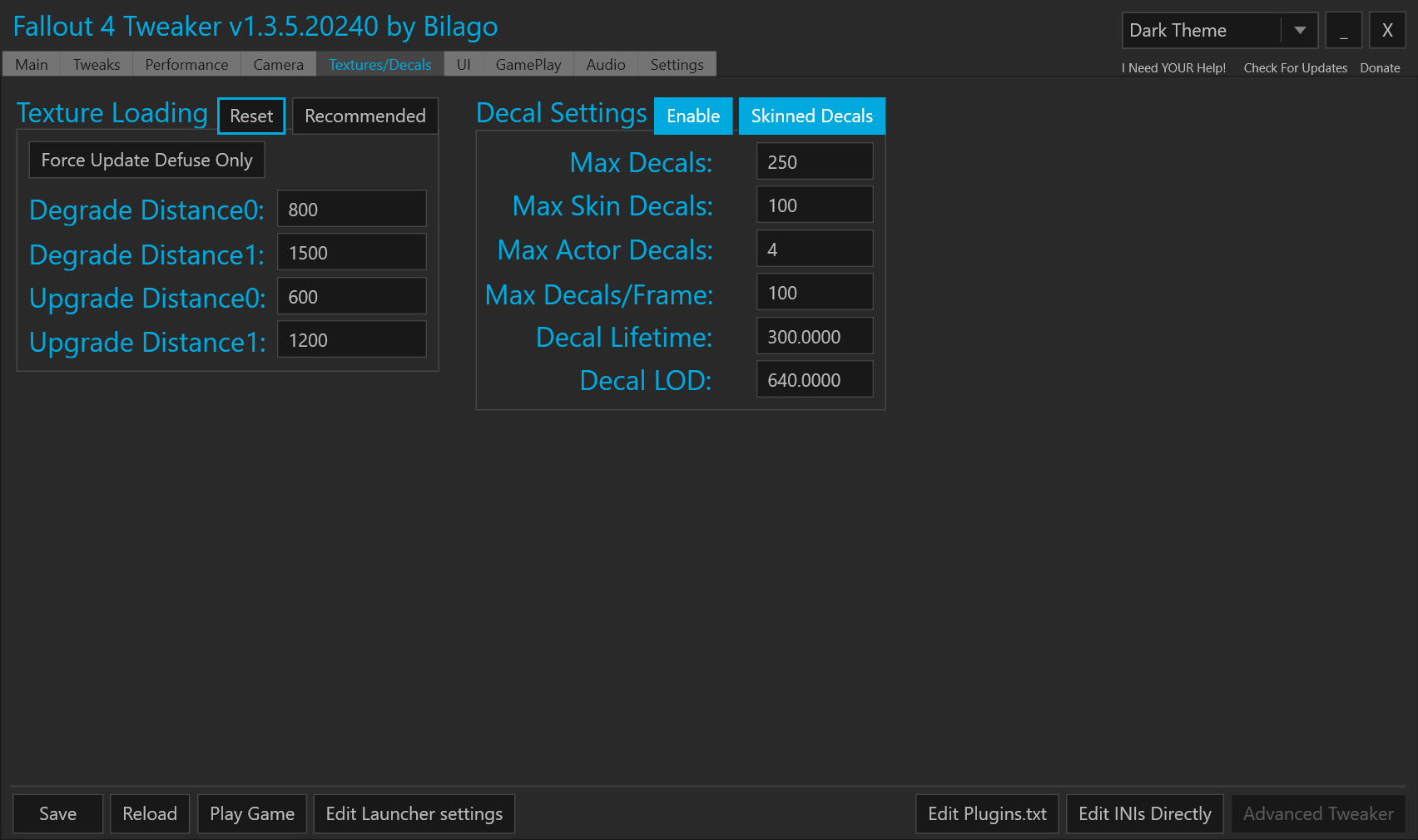 Recommended  pushes the limits of texture streaming from PS4/XBO to PC specs.  It also enables the update on the other texture maps besides the defuse.  Your bump maps, specular, environment, ect.  Here though I decided to use the vanilla distances for PS4/XBO but I enabled updating the other maps.  I switch this on/off  but I never go above the recommended because it increases loading times.  It's also good to limit the decals on actors cause if 25 decals stack up it looks stupid, keeping it low just makes them look wounded, but this also requires setting decals on actors to last longer than a little while, like 5 minutes, I always forget to do that for some reason. 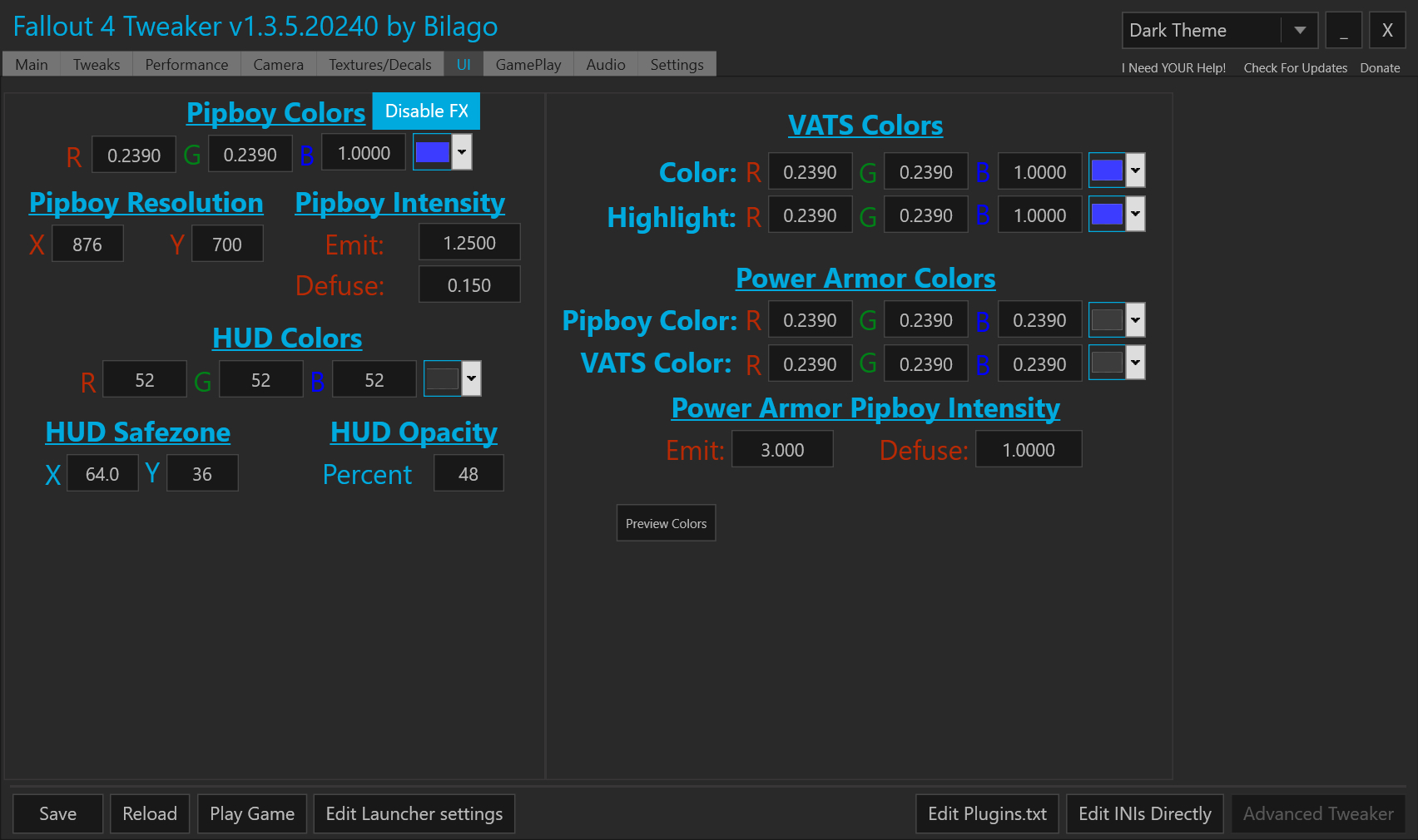 Dope colors, basically.   The dark gray blends into the scene for UI, and the blue is just fun.  Sometimes I make a real nice radioactive looking green cause of FO3.  But you'll have to figure out the PA settings on your own, I'm not sure anyone even knows how to set that, it's kind of a mess.  We use a mod for PA UI and HUD anyway. 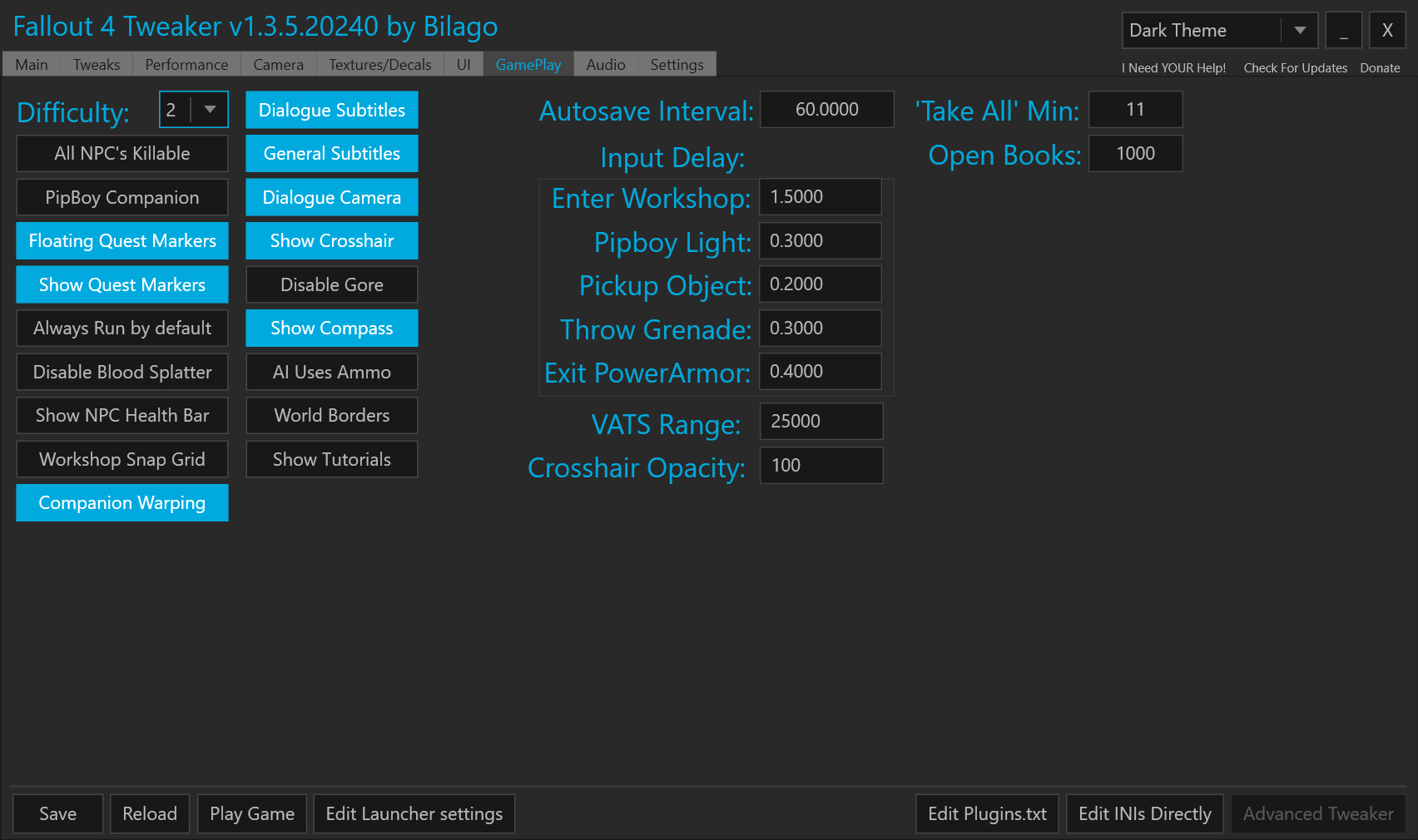 Dumb stuff we have to do to play the game. 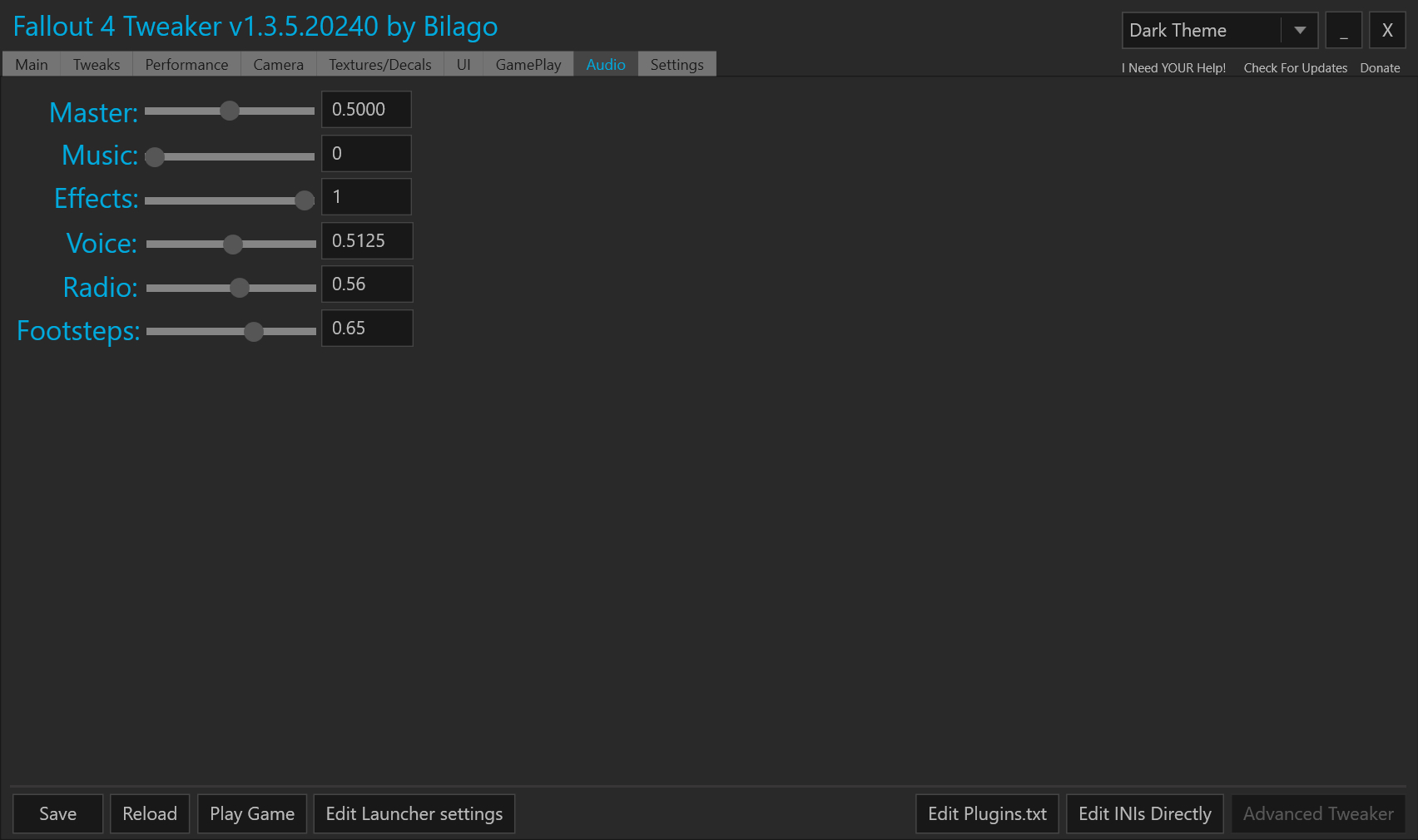 You'll have to turn the master all the way up, I was testing something while listening to the radio.  The voice setting is so when I see someone talking, what that looks like, makes sense with what I usually experience.  The voice seems real, like it came out of the mouth, and not like it had the volume turned way up so everyone could hear.  It's set so it looks real, and the voice sounds real coming from the mouth.


Hit me up on Discord @  Hunted Plaster#9656  or  Join my empty server for some Fallout stuff.  https://discord.gg/B4HQfgWt8T

Back to Fallout 4 Discussion

Also tagged with one or more of these keywords: fallout 4, fo4