just liek everyone else here I have a bug which I seem to be unable to fix. I tried steve40's first 4 steps and also the wisp bug fixer but it doesn't seem to be the problem. Maybe one of you can find out which bug mine is. Thx a lot

If you have the unofficial patch, it adds a shrine to the side room in the temple of Kynareth in Whiterun that might help, it's called "Shrine of Cleansing - remove unwanted visual effects" or something like that.

just liek everyone else here I have a bug which I seem to be unable to fix. I tried steve40's first 4 steps and also the wisp bug fixer but it doesn't seem to be the problem. Maybe one of you can find out which bug mine is. Thx a lot

If you have the unofficial patch, it adds a shrine to the side room in the temple of Kynareth in Whiterun that might help, it's called "Shrine of Cleansing - remove unwanted visual effects" or something like that.

Unfortunately, I don't have any unofficial patch. Where could I get that?

If you are invisible, I can confirm the fix that unlocking the Become Ethereal Shout in the magic section (pressing R on PC to actually unlocking it), then using it (this will make you visible again but only for a little while which is why the next step is important) and after this immediately fast travel to some place -- this fix will make you turn visible again!

I hope this helps.

So, for anyone who came to this thread and was disheartened, as I was, at the lack of a console command to remove a magic effect added by an enchantment that got stuck, and doesn't want to use recycleactor or resurrect, I found a solution. It's a PITA but it works. It also may not fix your specific problem but it's worth trying.

Fair warning, it requires editing or creating .esp/esl/esm files using SSEEdit/TESVEdit so not for the faint of heart. For background, I had a magic effect from a ring that added several magic effects via enchantment. When I updated the mod it had removed the ring but the effect was still being applied. Equipping a new version of the ring didn't help, nor did equipping a newly enchanted item with the same enchantment.

Again, fair warning, this is going to be pretty high level since all of the individual steps can be researched separately.

Here's what I did:

-I have a "scratchpad" esp that I use to make small tweaks or fixes to mods, so you'll want to use one or at least create a new empty .esp. You may end up with this .esp in your load order for the save if you don't know how to save clean. Wasn't an issue for me but your results may vary.

-Copy both the enchantment in question and the effects that are used by the enchantment to the new esp as overrides. This is done instead of modifying the original .esp so it can be easily reverted. If you don't want to add a new .esp you'll have to modify the original .esp files and do so at your own risk. Backups and/or writing down exactly what you changed can help a lot.

-If the enchantment can't be added to an item, you'll need to change the "worn restrictions" to something you can enchant easily

-Add the "dispel with keywords" flag to the magic effects that are stuck.

-Increase the magnitude of the effect to higher than the original effect.

-Save the .esp and add it to your load order if not already there. Launch Skyrim normally.

-Enchant a new item with the now modified enchantment and equip it. I used a black soul gem to maximize the new effects and I was fortunate to have a new copy of the ring that I could disenchant, otherwise you'll have to add the enchantment with the console

-In my case, this added the new magic effects from the enchantments and removed the "stuck" magic effects, and after unequipping the newly enchanted item the new effects fell off too.

-Toss the new enchanted item, make a new save, remove the modified effects and enchant from your scratchpad esp, and that's it.

I think the new effects has to be stronger than the old ones to dispel them. In my case, the effects all had the "power affects magnitude" so that may explain why this worked. Hopefully this comes in useful for someone else in the future.

tried evrything, none worked, still have the draugr eyes

I have an effect from the Colorful Magic mod (SSE). I was fighting the boss, Little Mora, and a tentacle effect got stuck on me and no cleaning seems to help. I attached a screenshot of the effect.

My character got this weird embers effect around him. Tried all the suggestions listed earlier, as with all Bethesda games, nothing worked just as I expected. Reverting to an older savegame was the only choice. It probably was some obscure mod that thought adding that screen effect was a great idea. 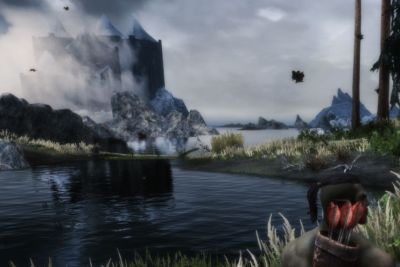 edit: looks like it was toxicity that was causing it reactivating the mod and disabling the particle effect got rid of the flying ashes, phew!