35 replies to this topic

I've uploaded some files that may be helpful, including a shader showcase nif, and blending and testing nif. They can be found at this link.

Nifskope
Nifskope is a program that can open, view, and save nif files. The nif file format is the model, or mesh, data storage format used in games that utilize the Gamebryo Engine, formerly Netimmerse, and spin-offs of that, which include all games made by Bethesda Game Studios (BGS), Morrowind on - starting with Skyrim, BGS redubbed their engine Creation Engine. Nif files also commonly contain animation data in various forms, shader and material data, collision information, and other miscellaneous data, such as inventory model preview rotation and zoom.

Shaders
In the context of 3d graphics, a shader is a set or sets of predetermined calculations that utilize multiple inputs to generate specific visual outputs to aid in rendering a desired image. The term is general and can cover a range of things. Specific to the case at hand, shaders are used to aid rendering by simulating various materials upon the surfaces of 3d models.

BSLightShaderProperty
You might be asking what a BSLightingShaderProperty is. It is a data block, or grouping of related data, that exists within a nif file. It contains data that the in-game shaders use to define how the surfaces of a model are rendered (shaded). It is used in Skyrim LE and Skyrim SE. The niftools team, as well as other contributors from the community, have decoded and translated that data so that it can be displayed, understood, and edited in Nifskope, and elsewhere.

Textures
What is a texture?
In the context of 3D art, a texture is an image stored in some digital format. These images are a means of storing information that is used in calculations related to a models surface shading. They are inputs to a shader.

Spoiler
Digital images come in a variety of forms and formats. In their most basic form they are linear uncompressed grayscale. That is a two-dimensional array of values - a single image channel - each value lying at or between some minimum and maximum. These values will eventually be interpreted and displayed to you as an array of pixels, also know as an image. Typically, the maximum will be displayed as white and the minimum will be displayed as black; any value lying between them will be some shade of gray. In the case of a color image, three separate grayscale images - called image channels - are used to reconstruct the color information. The three image channels store values of red, green, and blue intensity. For this reason, a color image can be called an RGB image, as short-hand. A color image can also have an additional image channel tacked on, called an alpha channel - such an image could be called an RGBA image. This likely first became common place as a means of describing transparent areas of an image, which is how it is sometimes used in 3d graphics, however, this additional information can be used for various purposes, determined by how a particular shader is programmed

At their most basic level, computers utilize binary information. Any information that will be interpreted by a computer will exist as ones and zeros, in some form - on the harddrive, ssd, cache, ram, et cetera. This information is stored as bits, each bit representing a one or a zero. However, a single bit of information is not useful for much by itself, so bits are often packaged together in sets of eight, called bytes. When you see an integer value in decimal displayed on your screen, it exists in the computer, at some level, as a set of binary information. For example, the decimal value 255 is 11111111 in binary, which can be stored in one byte. This brings me to the most common image bit-depth you will encounter, which is 8-bit. When an uncompressed image has an 8-bit bit-depth, it means that each image channel value of each pixel is stored as one byte, with some binary value at or between 0 and 11111111, or decimal value 0 to 255.

A linear image is one whose image channel values are interpreted and displayed linearly, in a linear color space. That means that, in the case of an 8-bit grayscale image, a value of 127 will be displayed as midway between black and white; it being the mid point (also sometimes 128) between 0 and 255. In the case of an RGB color image, mid gray is red value 127, blue value 127, and green value 127; this can be written as the 8-bit color value 127, 127, 127.

Many games utilize the direct draw surface (dds) image format as their texture image format of choice - Skyrim is among those games. The dds format supports storing images in both compressed or uncompressed forms, of which there are various types. Supported types depend on the graphics hardware and its supported DirectX version, as well as the games supported DirectX version. The compressed form uses BCn compression of some type, which type is denoted by the labels BC1 through BC7. More infomation about BCn compression can be found here, in this well written article by Nathan Reed.

Shader Inputs
A shader will typically utilize more than one texture, as well as other more simply defined inputs, in order to control the resulting output. Utilizing nifskope, we can see and edit these inputs, both in the block details of the BSLightShaderProperty (more simply defined inputs), and by changing the texture paths in the BSShaderTexture set block - which point to textures that can be edited using some other software. 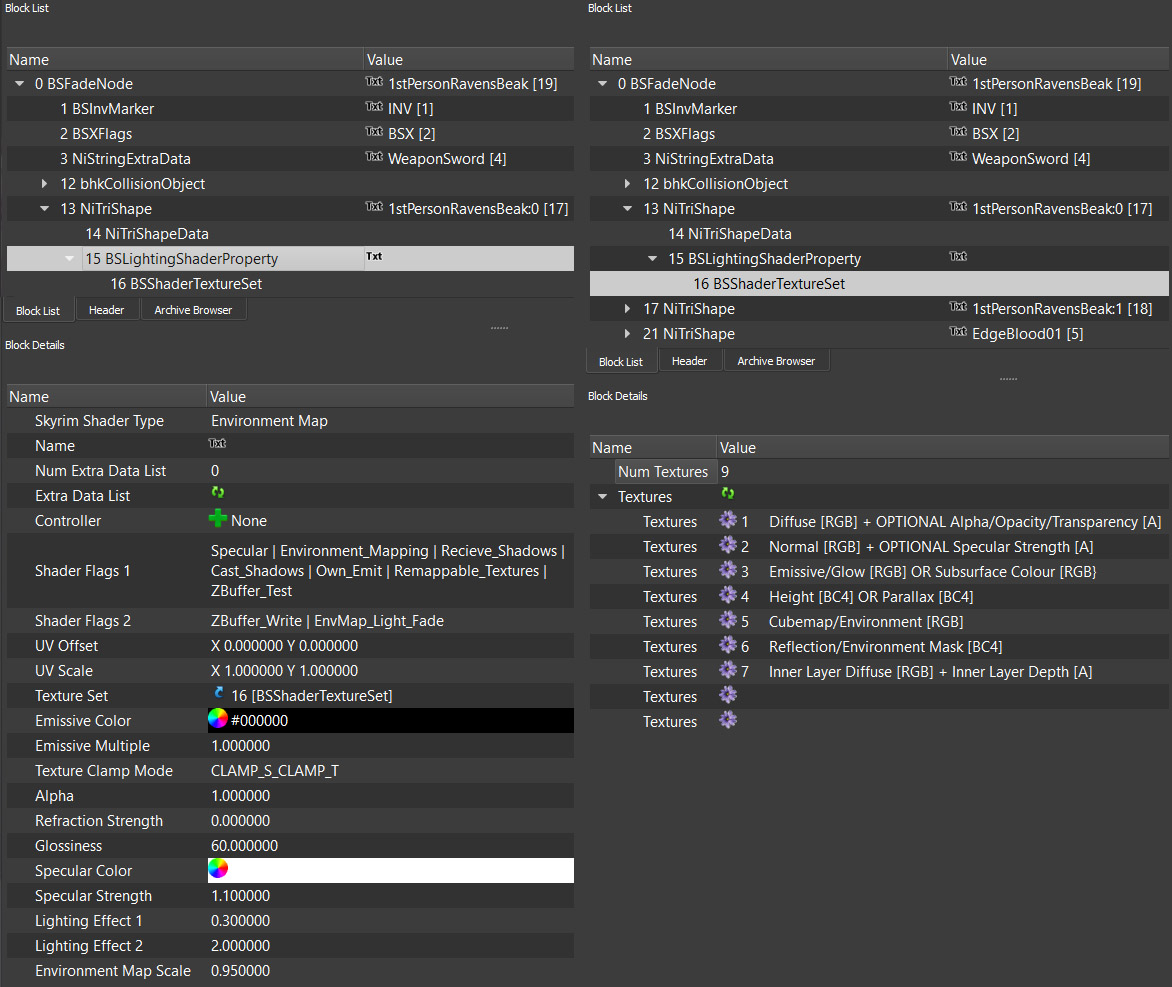 The base color of the models surface.

What is it?
Simulates the general reflection of the surrounding environment on the models surface. The simulated environment reflections are not necessarily mirror like, although they can be with the right settings and cubemap (environment map). Cubemaps are bre-baked images, six sides of a cubic environment projection stored in one color image. Another common environment map type is a spherical environment map, although I do not believe it is supported in Skyrim. Some games have dynamic cubemap switching, in combination with in-editor area-based auto-baked cubemaps, to enable better accuracy of the reflections to actual in-game environments. Skyrim does not support such a thing, as far as I am aware.

0.0 is generally lowest intensity, aka off
greater than 1.0 is higher intensity, brighter

a black pixel is minimum intensity, environment/cube map has no effect in these areas

a white pixel is maximum intensity

a black pixel is minimum intensity, environment/cube map has no effect in these areas

a white pixel is maximum intensity

What is it?
Dynamically simulates highlights from in-game light sources on the models surface. Specular is not required for your model to receive lighting, only (specular) highlights. In Skyrim's case, in-game lights include: the sun, moonlight, torches, fires, lanterns, magical auras, and natural light sources in interiors - in some cases, things that seem like they should emit light do not and are actually just visual effect fakery.

0.0 is minimum intensity
greater than 1.0 is higher than normal intensity, brighter

color of the specular highlight

width of the specular highlight

10 is a wide specular highlight What is it?
Simulates a glowing surface. Does not emit light, simply fakes the look of light emission.

0.0 is minimum intensity, no glow
greater than 1.0 is higher than normal intensity, brighter

glow map is generally a color [RGB] image, or can be grayscale

What is it?
Simulates model surface opacity or transparency - either via on off testing or blending. Testing and blending can be used together or alone. Testing is used in situations where the model's surface is either fully visible or invisible, with no in-between. Blending is most commonly used for surfaces requiring transparency or semi-opacity.

Flags ~ Enable Blending ENABLED *optional can use testing, blending, or both

Flags ~ Enable Testing ENABLED *optional can use testing, blending, or both

Alpha Test Threshold ~ Some Value Between 0 and 255 SET

only alpha channel has an effect A texture in which data is encoded that is used to bias the lighting on, or shading of, the model's surface. It is used to fake the shape and complexity of a models surface. There are a few types, the type used in Skyrim is tangent-space normal mapping.

BS Vector Flags ~ Has_UV *in some versions of nifskope this does not exist, instead set BS Data Flags to 4097

BS Vector Flags ~ Has_Tangents *in some versions of nifskope this does not exist, instead set BS Data Flags to 4097

What is it?
Simulates image distortion due to refraction of light through a surface. Objects behind the model will be distorted depending on the shader settings used.

1.0 is maximum intensity, most extreme distortion

0.0 is minimum intensity, no distortion

What is it?
Simulates an inner layer under the model's surface, optionally simulates refraction of that inner layer as well.

Appearance Controllers
Environment map and specular / glossiness have no effect on the inner layer!
BSLightingShaderProperty

inner layer diffuse is the diffuse texture of the inner layer

DDS image format as it pertains to Skyrim

MIP Mapping
Always generate MIP maps when saving a DDS image for use in Skyrim. Saving a DDS image without MIP maps has been known to cause lag on asset load (ex. pause when swapping weapons). Google MIP mapping if you'd like the details about what it is and what it does.

Uncompressed (8.8.8.8 ARGB, 8.8.8 RGB)
Uncompressed dds images are quite large (space on disk and in RAM) compared to those saved with DXT compression. The benefit of uncompressed textures is the lack of compression artifacts. This can be important when artifacts are noticeable in-game.

**if textures are too large, this can cause lag on asset load, especially with slower computers

Incompatibility between some effects can be worked around by layering meshes (NiTriShape). For example, for glow shader and environment map, one NiTriShape will have a BSLightingShaderProperty set up for environment mapping, while another will be set up for glow. The glow NiTriShape will use alpha transparency to hide all areas that do not have the glow effect. The glow map can be used for the transparency map in diffuse alpha image channel. This workaround can be used in many different ways, be creative.

Very useful informations for everyone! Many thanks for this!

You should add a link to this thread in your sign. I'm sure it will help a lot of prospective modders in the future.

Thanks for the info, very informative.

No problem. I made this quite a while ago. I posted it with an incorrect name. This information can be quite hard to find and even harder to figure out for a beginner. I made this as a quick reference. There is quite a bit of information missing. I only included what I know to be correct (ignoring the height map slot). I might add refraction, normal mapping, and parallax mapping information in the future.

This should be sticked somewhere, as it would be a shame to "lose" this in the ever extending tread list of this forum.

Fantastic! Ummm ... you wouldn't happen to have the same kind of rundown for the BSEffectsShaderProperty, would you?  Or any information on the shader property controllers?

Truly, this tutorial deserves to be spread widely.

No, I haven't used BSEffectShaderProperty at all up to this point. As for shader property controllers, I was playing around with them a bit in the past. I was trying to make a pulsing glow effect. In fact, the head in my Longclaw mod uses that exact effect. You could take a look at that if you need an example. I can't really explain any of it off the top of my head atm. It's been quite a while since I played around with them. This niftools thread has some useful info.